Edina, MO – November 1, 2018 – The Edina Volunteer Fire Department responded to a vehicle fire Thursday morning on the west side of the Highway 6/Lafayette Street and the Highway 15 intersection, which is know to locals as the four-way. The fire occurred only one block west of the Binks Fire House and the department arrived quickly.

The vehicle, a 1996 Ford F-360, was acting up before it caught on fire, said owner Ronnie McCauley of Edina.

McCauley popped the hood from the cab of the truck while stopped at the intersection and after he saw smoke coming underneath. He pulled the hood release and saw a billow of smoke come out accompanied by flames. He called 9-1-1 immediately. 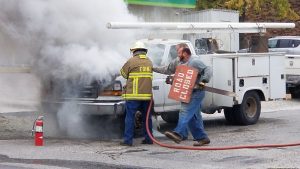 The Edina Volunteer Fire Department and the Edina Police Department responded to the call. Tim Couch, Knox County Road and Bridge Supervisor, was also on the scene helping McCauley get the hood of the vehicle open and making sure everyone was okay. No one was injured in the fire or during the response.

The engine compartment of a 1996 Ford F-360 was charred by fire on Thursday morning, November 1, 2018 at the four-way in Edina, MO. Photo by Echo Menges

McCauley’s truck is a total loss. Everything under the hood was destroyed by the fire.

The cause of the fire is unknown.