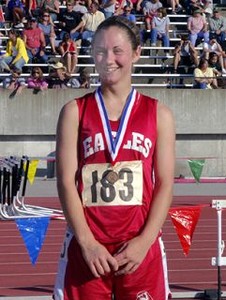 Katie Ausmus was about four feet shy of a Class 1 bronze medal in the 2007 girls’ 3200 meters, and won the second fourth place state track medal in Knox County High School history at the May 18-19 MSHSAA Track Championships, held at Jefferson City.

Garet Nunan and Laden Force are among the most recent Knox County Eagle state track medal winners. Previous KCHS athletes competed in Class 2. The current KCHS finish was the best since the 1977-1982 era when the late Dr. Erma Dovin won a 1977 girls’ discus title. Nancy Witte and Shelly Gudehus won state running titles for Knox County in 1981 and 1982.

“We were very pleased with all of our athletes,” said Knox County co-head track coach Kate Murphy. “Morgan (Nunan) has cleared 4’10” before, so I expected her to do that.” Nunan cleared five feet at the 2004 Knox County Relays. The same meet Alena Koester established the KCHS girls’ high jump record of 5’1”.

“Katie Ausmus and our 4×2 had personal bests. We couldn’t ask anything more than what they gave us. It was wonderful.”

Brashear qualified several athletes for the 2007 Track Championships but could not win a medal. Sectional champion Shanea Rusk finished 13th in the girls’ 100m hurdles in 18.75 seconds. The top eight places qualify for the final in events involving preliminary rounds.

Kale Watson placed 16th in the boys’ 300m hurdles at 46.96 seconds. Ryan Ferdig was among several Brashear athletes that finished one spot away from a state track berth or a medal. Ferdig ran the boys’ 200m dash in 23.84 seconds, good for ninth place, .14 of a second from a spot in the finals and a medal.

Kale Watson, David Anderson, Matt Thomas and Ryan Ferdig finished 13th overall in the boys’ 4x100m relay with a time of 47.40 seconds. Amanda Woods was 14th in the girls’ triple jump at 29’6”. Sectional champion Christina Scudder battled flu like symptoms and placed 12th in the discus at 91’2”.

Nunan had the bar land under her right arm on her final attempt, and ran the 4x200m final with shoulder pain. Morgan Nunan stood on the medal stand becoming the first KCHS track and field athlete since her cousin Garet Nunan won a state medal in his senior season.

“It makes me happy to win, said Morgan Nunan after the high jump medal presentation ceremony. “I hurt my arm and got sixth. It was all right. I did my best. That’s all that matters.”

“It was great to finally get a (state) medal in my senior year,” said Nunan who later earned another sixth place medal in the 4x200m relay.

While Morgan Nunan was competing in the high jump, freshman Katie Ausmus was stretching a few yards away to begin her MSHSAA Track Championships career in the 3200-meter run.

Katie Ausmus ran with the top six in Class 1 the entire race. Miller sophomore Taylor Rivera pulled away from the field in the last mile, and won the gold medal in 12:07 seconds. Centralia sectional champion Amy Gangloff of Wellsville took the silver medal in 12:20 seconds. Hannah Vette of Tarkio and Katie Ausmus sprinted down the stretch for the bronze medal.

Vette crossed the line first at 12:31.56 seconds. Katie Ausmus was about three or four feet back of the bronze medal and broke the Knox County school record with a time of 12:31.82 seconds.

The next runner was eight seconds back. Katie Ausmus was presented with only the second MSHSAA fourth place track medal since consolidation in 1963 according to state records.

Perhaps the most impressive thing about Katie Ausmus’ run was that trainers were busy tending to several runners near collapse at the finish line.

Katie Ausmus was in such good physical condition that she was barely winded after running two miles against the best 2007 runners in Class 1. Highland boys’ state champion Roger Morse is the same way.

“I was just trying to keep up with the girl that beat me at Sectionals (Amy Gangloff),” said Katie Ausmus of her race strategy. “I pushed really hard at the end. I was pumping for third but she was too far ahead.” Katie Ausmus ran the girls’ 1600 meters on day two, taking 12th overall in 5:53.26 seconds.

Morgan Nunan, Amanda Woods, Tessa Ramer and Lorelei Schlueter messed up a handoff during the 4×200 meter preliminaries, but were able to qualify for the finals, finishing sixth at 1:54.50 seconds.

The Lady Eagles took the track for the 800m relay finals on Saturday. Senior Morgan Nunan shot out of the blocks starting her last high school sporting event. The baton flew around the track smoothly. Freshman Lorelei Schlueter leaned to the finish line for a 1:53.48 second finish, good for fifth place medals.

St. Louis Wellston Eskridge won the Class 1 girls’ 4x200m state title in 1:48.92 seconds. Liberal, Worth County and Polo were the second thru fourth place teams. Linn County was the next closest local team, finishing eighth in the finals at 1:54.78 seconds.

“They messed up a handoff in the preliminaries, but they compensated with their speed,” said Kate Murphy.

Knox County R-I senior Morgan Nunan paused to comment for the Edina Sentinel before rushing back home for her graduation ceremonies later that evening.

“This is pretty awesome,” said Morgan Nunan with her second 2007 state track medal around her neck. “It took us a long time to get our steps down,” said team member Lorelei Schlueter. “The handoffs went pretty smooth,” said Nunan. “I’m just pretty proud of my team.”

“We ran our hardest,” said sophomore Tessa Ramer. Schoolboy and girl rivalries popped up during the final days of classes while the sixth seeded Eagle baseball team was upsetting district opponents and reached the finals. Knox County lost to Canton in the last inning during the district championship game.

There will likely be more Knox County boys participating in baseball and track next season. The Eagles failed to qualify any boys for the 2007 Track Championships.

“They took our conditioning at the beginning of the season like champs,” said Kate Murphy. “It was hard. They were sore and tired but they began to see that we had a plan for them.”

“They threw their bodies, their hearts and their minds into the sport. It really paid off,” said Kate Murphy. Co-head coach Ann Murphy played a huge role in the successful Knox County track season.

She will be a prime candidate to succeed Jim Coniglio as the Cougar track coach. Jim Coniglio has accepted teaching and coaching jobs at Hannibal High School.

The KC girls’ district championship track program needs to recruit weight throwers and middle distance runners from their student body for next season.

Hopefully some of the Eagle football and basketball players will take advantage of a great opportunity to try for state track awards next season.

“We put all our anger into running and it helped,” said Lorelei Schlueter. “Nobody thought we could do it,” said Tessa Ramer. “Some of the baseball boys said that track was easy and that you could just go out and run and win medals. It’s not that way at all.”

“This was an amazing experience,” said sophomore Amanda Woods. “I feel like the key thing is how fast you can get to the corners.” None of the current Lady Eagle track athletes were born the last time Knox County R-I did so well at a state track meet.

“This is a new beginning for Knox (County), said Tessa Ramer. “All the sports are looking up.”

Lady Eagle three sport athlete Amanda Woods said, “I think the next couple of years are going to be pretty good. I’m looking forward to it.”