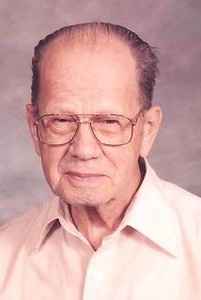 Glen was born December 14, 1909 the son of George Henry and Dora May (Kenoyer) Pulis.

He was united in marriage to Bessie Marie Kenoyer on September 16, 1935 in Edina, Missouri and she preceded him in death September 14, 1996.

He spent his entire life in Knox County with the exception of two years.  Mr. Pulis was employed with Wells LaMont Glove Factory and was Edina Police Judge for a short time.  He was self-employed as a plasterer, paperhanger, and painter.  He was also a volunteer for the Knox County Food Pantry.

Glen always raised a huge garden but especially enjoyed his family and church.  He was a lifetime member of the Edina Assembly of God Church.  At one time, he and Marie were chosen as representatives from this area to go to Washington, D.C. and attend sessions concerning welfare and public assistance programs.

Expressions of sympathy in memory of Glen Pulis may be made to the Knox County Nutrition Site or the Donor’s Choice.