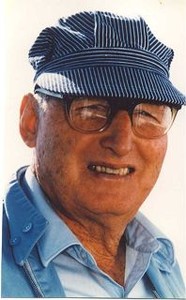 Weldon graduated from Gorin High School in 1941 and operated a gas station in Gorin before serving in the US Army from 1943 to 1945.

Weldon farmed and operated a trucking business before he carried the US Mail on the rural route of Gorin for nearly 30 years.

He was well known for hauling in fresh peaches and melons each summer.

He married Mona Trent Winn on January 12, 1974, and together, they operated the Weldon Tague Iron and Salvage business in Gorin until his death.

Weldon was an active member and elder of the Gorin Christian Church.  He also belonged to the American Legion, A.F. & A.M. Lodge of Masons, the Wyaconda Lions Club, and the Land Improvement Contractors Association.

He was preceded in death by: his parents; three brothers, Richard, Jean, and Evert; an infant sister and a grandson, Thearn Treasure.

Memorials were suggested to the Pleasant Grove Cemetery in Gorin, Hospice of Northeast Missouri, or to the charity or organization of the donor’s choice and can be left at or mailed to: Gerth Funeral Service, 115 S. Main, Memphis, MO 63555.