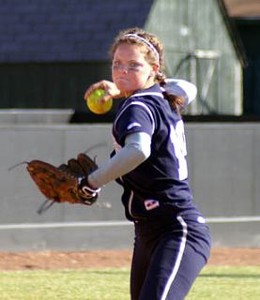 Katie McMahon was previously named to the 2007 American Midwest Conference Softball First Team along with being the AMC and Region V Pitcher of the Year.

Katie McMahon finished her junior campaign with a 17-12 pitching record and a 1.39 earned run average. Katie McMahon struck out 162 batters in 144 innings pitched. She batted .270 with 13 RBI’s during the 2007 season.

The Region V Champion Cougars ended their season in the NAIA National Softball Tournament in Alabama with a 20-12 overall record. Marcie McMahon batted .231 with a homer and 12 RBI’s in her senior season.

Marcie McMahon has played in the National Tournament during three of her four year college softball career. Marcie McMahon is on track to graduate from Columbia College after the first semester of 2008.