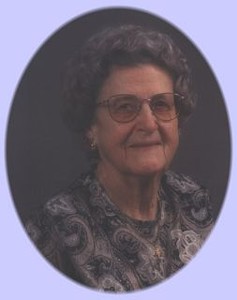 She was born July 14, 1912, at Kahoka, MO, the daughter of Jacob Henry andEva Lovina Boley Blum.

She married Everett Leroy Bash on May 21, 1931, at Lancaster, MO. He preceded her in death on November 12, 1969. She was also preceded in death by her sister, Velma Mae

She lived 48 years in Kahoka and Ashton (MO) before moving to Keokuk, IA in 1960. Since 1992, she has lived with her daughter in Linden, TX. She was a homemaker and member of St. Paul United Church of Christ in Kahoka, MO, and Keokuk, IA, and also of Royal Neighbors of America.

Visitation was held after noon on Friday at Wilson Funeral Home with family receiving friends from 6-8 p.m.

Memorials are suggested to the American Heart Association or St. Paul United Church of Christ in Kahoka.