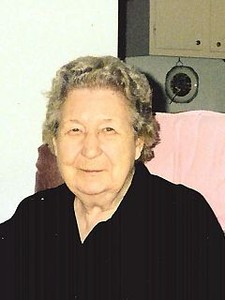 Genola Emily Wellfort, 94, of Memphis, died Monday, May 28, 2007 at the Scotland County Care Center in Memphis.

She was born the daughter of George Israel and Merle Marie Rude on January 1, 1913 in Hickory Grove, near Arbela, Missouri.

She then married George Leo Wellfort.  He preceded her in death on September 20, 1984.

Genola was member of the Methodist Church.   She enjoyed going to yard sales, gardening, and canning.  Genola was also an avid coin collector, joining the Coin Club and attending many coin shows.  She was also a past member of the V.F.W. Ladies Auxiliary.

She was preceded in death by her parents; husbands; a sister, Zelma Frances (Rude) Harvey and her husband, Victor; step children, Richard and Norman Nelson, and George Wellfort.

Funeral services were held at 2 p.m., Friday, June 1, 2007 at the Gerth Funeral Chapel in Memphis with the Rev. Charles Hammack officiating.  Serving as pallbearers were Tim Kainz, Melvin Baker, Robert Weis, Sr. , Dennis Nelson, Robert Weis, Jr. and Gale Blackwell, Jr.. Burial was in the Hickory Grove Cemetery, Arbela, MO. Memorials were suggested to the donor’s choice and can be left at or mailed to:  Gerth Funeral Service, 115 S. Main St., Memphis, MO 63555.

Condolences may be sent to Mrs. Wellfort’s family via email at gerths@gerths.com.