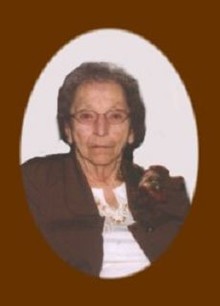 She was born April 23, 1922, at Chambersburg, MO, a daughter of Raymond Pearl and Beulah Belle Coffin Yates.

She was preceded in death by her husband; her parents; and a sister, Mavis Jean Worrell.

She was a homemaker all of her married life, helping her husband on the family farm and raising her children. She attended Anson Community Church and was a member of the Anson

Anson Ladies’ Aid.. She was a member of the Go-Go Girls card club, playing cards and games regularly the first Tuesday of the month and ready to go again whenever someone would call. She loved flowers and missed the farm and gardening. She also loved the Nashville channel and listening to country western music. More than anything, she loved spending time with family, especially her great grandchildren.

Kahoka with Rev. Ken Goyer officiating. Mrs. Colleen Watson was pianist and special music was "I Need Thee Every Hour".

Visitation was held at Wilson Funeral Home after 4 p.m. Saturday with family receiving friends from 6-8 p.m.

Memorials are suggested to Anson Community Church or the donor’s choice.