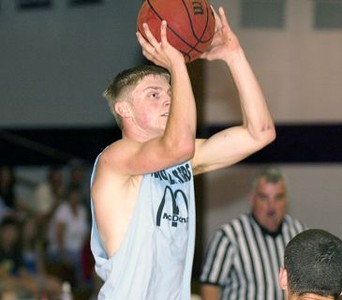 Andy Anders who has committed to play basketball at Culver-Stockton College and Curtis Smith, who has committed to play basketball at Central Methodist University, competed in the Northeast Missouri Officials Association All-Star game June 2nd in Kirksville at Pershing Arena on the Campus of Truman State University.  When asked about going to Culver-Stockton and his future Andy said, “I am excited, Coach Hoyt said that I would probably start out on the J.V. team but hopefully I can work my way up to the Varsity.”  The game featured 24 of the best high school seniors in Northeast Missouri from 11 area high schools.  The schools included Kirksville, Atlanta, Newton-Harris, Highland, North Shelby, La Plata, Green City, Putnam County, Schuyler County, Novinger, and Linn County.  The teams were divided into 12 players each called the Red and Blue teams; Andy and Curtis were on the Blue team.

The Blue team jumped out to an early lead as they started the game out on a 12-2 run behind the hot shooting of Chris Clark from Kirksville as he scored eight of those 12 points.  The Red team rebounded to cut the lead to six at 12-6, but the Blue team responded with a 6-2 run to close the first quarter and grab an 18-8 lead.  The second quarter was similar to the first as the Blue team built their lead up to as many as 15 points and led 38-26 at half time.

The Red team came out in the third quarter and quickly cut into the lead thanks to an 8-0 run to start the quarter.  After the Blue team hit a free throw to stop the run the two teams traded baskets the rest of the quarter giving the Blue team a four point lead at 46-42 heading into the fourth quarter.  “We changed our line up and we didn’t get out and run like we did in the first half to build our lead, and wear them down,” Anders said.  The fourth quarter saw the Blue team maintain a lead of until the four minute mark when the Red team started an 11-0 run to tie the score at 53 and take the lead on a three pointer by Reggie Dunkin of Putnam County.  Smith said, “The Red teams second team was bigger than ours and by the time we (our first string) got back in the game the Red team had their confidence up and we couldn’t stop them.”  After a couple of free throws from the Blue team the Red team put the game away by going on a 14-4 run to close out the game.  Andy and Curtis both said, “We were tired from sitting out the last part of the second quarter and then again to start the third quarter and never could get back into a rhythm and run like we did in the first half when we built our lead.”

You can see both Andy and Curtis as well as Nick O’Brien next Saturday June 9th in the McDonalds Illinois/Missouri All-Star Game at Quincy University.