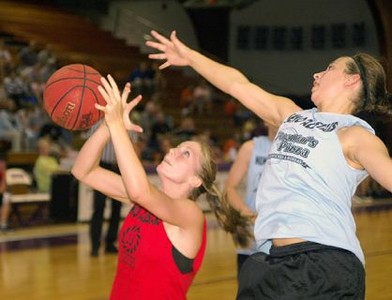 The Red Team had five state champions on their roster, and made plays down the stretch for the victory. Knox County guard Kisha Tungate put the Red Team into the lead by an 8-6 margin at the 4:10 mark of period one.

Clark County’s Courtney Shuman lifted the Red Team to a 17-12 lead early in the second quarter. Taylor Spratt of Marion County tied the score at 21 with a three pointer. Brooke Riley took advantage of a turnover and put her Blue team up 25-21 with another home run ball.

Courtney Shuman pulled down the Red Team’s fourth offensive board in a crucial possession late in the first half. Brashear guard Kimberly Elsea drove in and tied the game at 25 with 46 seconds showing on the first half clock. Elsea sank two free throws at the 18.6 second mark for a 27-25 halftime lead.

Brashear grad Ashley Clarkson was a key part of her Red Team having seven shots at the bucket in one possession around the five minute mark of the third quarter. Clarkson sank two free throws for a 32-27 lead. Kimberly Elsea tossed in a Red Team score for a 34-27 advantage about 30 seconds later.

The Red Team led 36-28 late in the third quarter. The Blue team rallied back within a 38-33 deficit heading into the fourth period. Good shooting and take aways propelled the Blue Team to knotting the score at 42 with about five minutes showing on the fourth quarter clock.

The teams battled tooth and nail down the stretch. Brooke Riley and Taylor Spratt made big plays for the Blue team. Culver-Stockton basketball signee Anna Grgurich (Novinger HS) canned a key three ball for a 45-42 Red Team lead with 4:13 remaining in regulation time.

Taylor Spratt stole the ball and tied the game at 47 with 2:29 to play in the fourth quarter. Courtney Shuman responded with two free throws 20 seconds later. Brooke Bankus of Milan had a key put back for a 51-47 Red Team lead with 1:46 remaining in period four.

Chelsea Rouse sank two critical Blue Team free throws with 51 seconds to play in regulation time. The Blue Team handled the basketball better, and got back in the game with converted steals.

Kirksville grad Courtney McCartney tied the game with a free throw at the 18 second mark. McCartney blocked a Red Team shot and set sail for the winning basket. Missed free throws kept the score tied at 52. Kimberly Elsea was stopped on a last second drive to the goal. The game went to overtime tied at 52.

The Blue Team had a 56-55 lead and got the ball back. Milan HS grad Whitley Schnelle stole an errant pass near her basket with 16 seconds to play in the game. Sara Williams called her final timeout.

Courtney Shuman got inside position on a scoring attempt, and drew an over the back foul on Kirksville all-stater Courtney McCartney with 1.7 seconds showing on the overtime clock. Shuman drilled both free throws for the win.

“We hadn’t ran our plays really well,” said Quincy University basketball signee Courtney Shuman. “I was able to get a jump ball. I’m glad we were able to hit our free throws tonight. We just ran them really hard. I don’t think they could keep up with us. We had a lot of smaller girls and good shooters. I think that carried us in the game.”

“Even though they all come from different programs, they are all on this team for a reason,” said Sara Williams. “That shined through tonight. I thought they all did some good things. It might not necessarily be scoring. The big thing is they all played defense. They stopped the three big girls from Kirksville. We hit our free throws and played defense all the time.”

“We had to box out and give them only one shot,” said Williams. “I think we did a pretty good job on the boards. It was a fun game to coach and to watch.”

The Blue Team jumped out to a ten point lead during the first quarter of the boys’ contest. The Red Team overcame a 38-26 halftime deficit and took a 76-63 decision. Dave Fouch of LaPlata coached the Red Team and Newtown-Harris coach Tim Cool led the Blue Team.

Andy Anders and Curtis Smith will play for the Missouri All-Stars in the McDonalds’/Quincy Herald-Whig Classic on June 9 along with Courtney Shuman.