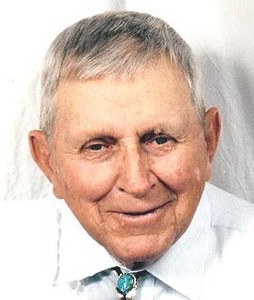 Joseph Ralston Wallace, of LaBelle, Missouri, died peacefully at his home south of LaBelle on May 31, 2007, at 84 years of age.

The son of Joseph H. and Margaret Zeh Wallace, Joseph was born on April 23, 1923, in rural Adams County, Illinois.

Having grown up in Adams County, Illinois, Joe graduated with the Clayton High School Class of 1941.  Enlisting in the Army Air Corps, Joe served his country from June 1941 to October 1945, with service overseas in North Africa, Corsica and southern Italy.  Following the war, Joe returned home to farm, and raise his family.  In 1951, he relocated from Illinois to Missouri, shortly thereafter, purchasing his farm south of LaBelle.  Through the years, Joe raised dairy cattle, shorthorn beef cattle, and had a grain and hay operation.  He worked for many years as an operating engineer of heavy construction equipment.  Some of the major projects he worked on included Highways 61 and 36, the Cannon Dam, and the Thomas Hill Power Generation projects.

As a young man, Joe joined the Presbyterian Church and was a member of the American Legion.  He retired from Local 513 of the International Union of Operating Engineers with over fifty years of service.

His wisdom, strength and kind, caring love will be deeply missed by his grateful family.

His parents, seven siblings, one son, Joseph Michael Wallace and two grandsons preceded him in death.

Expressions of sympathy may be made in memory of Joseph Ralston Wallace to the Illinois Veterans’ Home, Quincy, Illinois, or the donor’s choice and may be mailed to or left at Coder funeral Chapel, P.O. Box 151, LaBelle, Missouri 63447.