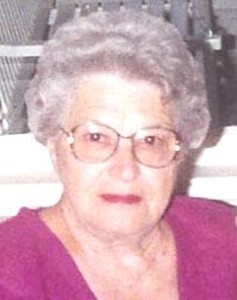 A daughter of Herbert G. and Flossie Mae Kurry Carper, Pauline was born on February 18, 1919, at Colmar, Illinois.

Raised and educated in LaBelle, Missouri, she graduated from LaBelle High School.

Pauline Carper united in marriage with Charles Wesley Roush on September 26, 1942, in Aberdeen, Maryland and lived most of her life as a loving, dedicated military wife and mother.

Throughout the years she provided a happy home for her family in Maryland, Colorado, New Mexico, Texas, Illinois, Brussels, Belgium and Paris, France.

The Reverend Sandy Browning will officiate for the Funeral services held June 7, 2007, at the Coder Funeral Chapel in LaBelle, Missouri, with Music selections “Amazing Grace” and “It Is Well With My Soul”.

Expressions of sympathy, in memory of Pauline L. Roush, may be made to the LaBelle or Quincy Libraries.  Memorials may be left at or mailed to Coder Funeral Home, P.O. Box 151, LaBelle, Missouri, 63447.