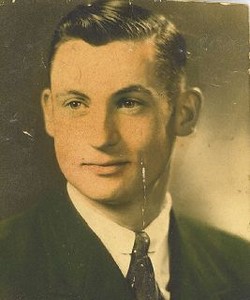 He was born the son of Benjamin and Nellie (Sperry) Rogers on October 19, 1918, at Bushnell, IL. Homer graduated from Bushnell High School and was always involved in farming and worked for the University of Missouri in extension work  eight years.

He married Carol L. Coons on November 27, 1944. To this union were born three children:  Adrian, Vicki Ann, and Miriam. Homer had been farming in Bushnell and they started their life together there.

Homer loved farming and the outdoors and was involved in 4-H, starting at an early age, and he had the honor of attending Chicago Club Congress. He continued being a leader as an adult.

Homer, Carol and children moved to Gorin, Mo, in 1956 after purchasing a farm there and attended the Gorin Christian Church where he was an elder and Sunday School teacher.

He was preceded in death by his parents, Benjamin and Nellie, a brother, Harold Rogers, and a sister, Helen Engel.

Memorials were suggested to the Scotland County Care Center or to the charity or organization of the donor’s choice and can be left at or mailed to the Gerth Funeral Service, 115 S. Main St., Memphis, MO 63555.

Condolences may be sent to Mr. Roger’s family via email at [email protected]

Arrangements were under the direction of Gerth Funeral Service from their Memphis chapel.