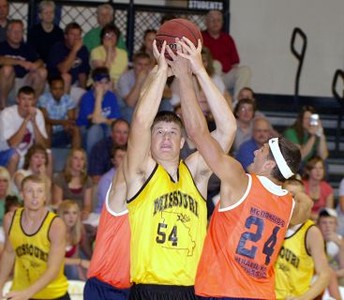 Missouri’s boys came to play a physical Illinois team during the 2007 McDonalds’/Quincy Herald-Whig Classic all-star basketball game. The heavily favored Illinois boys have lost only one game to the Missouri side in the series dating back to 1984.

Missouri ran the court well and jumped out to a 16-9 lead with 14:33 remaining in the first half. Illinois made plays in the last three minutes and pulled out a deceiving 105-96 win. The game was close much of the time.

Illinois fought back from their early deficit and led by as many as 12 points during the first half. Clark County post player Carrington Daniel stretched the defense with a pair of three point field goals. Daniel finished with a game high 12 rebounds and scored 11 points for the Missouri all-stars.

Curtis Smith tossed in a jump shot with two seconds remaining in the first half, pulling Missouri within a 56-54 intermission deficit. Both sides had players slapped with technical fouls after hard nosed drives to the basket late in the first half.

Andy Anders of Highland tied the game with a driving layup around the 12 minute mark. Illinois scored the next four points. Carrington Daniel pulled Missouri within a 66-64 deficit with 11:16 remaining in regulation time.

The underdogs tied the score at 70. Hannibal HS product Andrew Bergeson put Missouri on top by an 82-75 margin with eight minutes to play. Matt Bush capped a seven point Illinois streak for an 86-82 Illinois lead at the 4:49 mark of the second half.

Highland’s Nick O’Brien pulled Missouri back within a point at the 4:43 mark. The score was 86-85 Illinois. Josh Babb of Brown County HS along with Matt Bush and Jared Summers of Quincy High School sank critical shots, powering the Illinois all-stars to a 100-90 lead with one minute to play.

Curtis Smith canned two Missouri three pointers during the final minute of his high school sports career. “We came out and played our game at the beginning,” said the Highland all-stater.

“We pulled together as a team in the second half. We kind of lost that at the end,” said Curtis Smith. “We gave them a heckuva game. We let off on our defense in the last three minutes.”

“The Quincy guys are good players,” said Smith. “They got some wide open layups and they hit their free throws. Playing against top high school players in this game will help let me know what I have to do on the next level.”

“I was glad to be able to finish with my teammates and my coach,” said Curtis Smith. “Coach (Greg) Altmix has helped me to be a better player and a better person for the last four years. This whole week has been great.”

Missouri turned the ball over 28 times compared to nine Illinois turnovers. Illinois had only seven more shots from the field. Illinois had a 44% shooting percentage and Missouri went 29-81 overall for 36%. Missouri was 12-31 from three point range for 39%. Illinois was 9-33 from the arc for 27%. Missouri held a 51-49 rebound edge

Missouri was 26-40 from the free throw line for 65%. Illinois was 18-33 from the charity stripe for 55%. Brice Scott of Hannibal was the Missouri boys’ MVP with a team leading 20 points. Curtis Smith scored 17 points. Andy Anders tossed in 11 Missouri points. Nick O’Brien scored nine points and was in double figures with ten rebounds.

Josh Babb led three Illinois players in double figures with 24 points, earning the Illinois Boys MVP award. “The guys in that locker room deserve all the credit,” said Missouri head coach Greg Altmix of Highland HS. “They came together as a team and worked hard. They made new friendships. They made the decision to gell as a team.”

“The game is not as physical on the (Missouri) side of the river,” said Coach Altmix. “We tried to play solid defense. You can’t change all that in one night. We did the best we could to adapt. Our seniors are a special group of young men,” said Altmix of the three Highland players participating in the Classic.

“We would have loved to have Adrien (Clay) and Tucker (Martin) here tonight. The dedication and time all the guys put in to have the season we had,” said Altmix. Highland was 26-2 overall and finished in the Class 3 state quarterfinals.

“It was a joy to have one more opportunity to coach those guys,” said Altmix. “Carrington Daniel was one of the guys that helped bring us together,” said coach Altmix of the Clark County post player. “He makes guys feel comfortable with his personality. As many battles as we have had with Clark County, having the opportunity to see a different side was fantastic. We gave it what we had, we just came up a little short.”