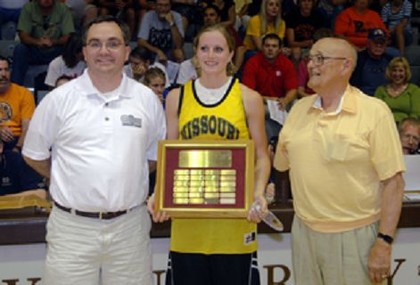 Missouri jumped out to a 24-9 lead with about nine minutes remaining in the first half of the 2007 McDonald’s/Quincy Herald-Whig Classic girls’ all-star basketball game. The west siders shot the ball better and played superior defense during the early portion of the first half.

Illinois found their shooting touch and tied the contest at 32 after the first 20 minutes. Marika Abbey of Highland sank a free throw with 15 minutes remaining in the second half for a 39-34 Missouri lead. Illinois picked up their intensity and reeled off an 11-4 run.

The Illinois girls wore down a shorthanded Missouri team in the final ten minutes and posted a 75-60 win. Central-Southeastern Illinois graduate Angie Schwagmeyer tied the contest at 43 all with 11 minutes showing on the second half clock.

Illinois took the ball to the rack and scored the next ten unanswered points. Julie Douglas of Hamilton-Nauvoo high school capped the decisive run with a three point shot at the nine minute mark for a 53-43 lead.

Missouri turned the ball over 37 times compared to 19 Illinois turnovers. Missouri held a 48-45 rebound edge. Illinois was 5-23 from the three point arc compared to 3-8 for Missouri. Illinois had 84 shots from the field and Missouri was limited to 48 scoring opportunities from the floor.

Missouri was 25-35 for 71% from the free throw line compared to 8-17 for Illinois. The east side team had a 19-10 steal edge, but fouled 25 times compared to 13 for Missouri. Former LaBelle Star sportswriter Will Johnson was the Classic statistician. Johnson is currently the Sports Editor of the Gasconade County Republican in Owensville, Mo.

“I think we got a bit tired,” said Marion County HS coach Mike Johnson. “Our shots stopped dropping and they went on a run. We played 30 minutes of good basketball.”

“We worked together and played a good first half,” said Missouri MVP Courtney Shuman. “I felt like I was representing Quincy University, so I had to do well.”