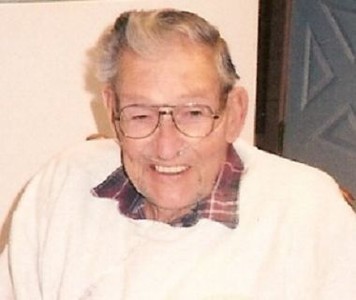 Jim was a member of Teamsters Local 21 and 688. He went to Mt. Vernon Star Grade School and then went through 9th grade at Hurdland High School. He quit school to work on the family farm after his father suffered a stroke.

Jim grew up in Hurdland, Missouri. He was drafted in the U.S. Army on December 5, 1944. Basic training was at Camp Campbell, Kentucky. He was in the 5th Infantry Division and then transferred to the 3rd Division, 21st Field artillery. In 1945, he served in the European Theatre in France & the Army of Occupation in Germany. On May 5, 1945, he was in Czechoslovakia from Bischofsreut in Bavaria Germany until June 23, 1945. By the end of June, he was back in France to return home on the General E. Goethe’s, an army transport vessel. On July 8, 1945, he arrived in the United States eight days later. James was discharged and then reenlisted for another year until November 16, 1946 when he was discharged.

Jim was a semi-driver for Kiefer Grocery Warehouse & then Bemis Freight Service until his retirement in 1987. He was baptized April 22, 1979 in Salem Lutheran Church, Mendon, Illinois.

He lived in South Bend, Indiana and then moved to Adams County, Illinois for the remainder of his life. He was active as a scout leader. James loved hunting, fishing, working with wood, gardening and spending time with his family and his puppy "Katie". During his illness the last 13 years, he enjoyed feeding and watching the birds and squirrels.

Funeral services were held on Saturday, June 9, 2007 at 1:00 p.m. at the Duker & Haugh Funeral Home by Rev. Sonny Woollard. Interment was in Evergreen Cemetery, Camp Point, Illinois. Memorials may be made to the family.