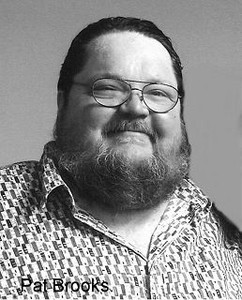 He was born on June 27, 1955 in Keokuk, IA, the son of Albert “Boots” Lee and Gladys Irene Testman Brooks.  On June 21, 1986, Patric was united in marriage to Jeanne Saunders in Alexandria, MO.  She survives.

He was preceded in death by his parents, three brothers, Kenneth, Clarence and Lloyd Alvis and one sister, Bonnie Brooks.

He graduated from Clark County High School with the Class of 1973.  He attended Quincy Tech in Quincy, IL.

He had been employed at Schelgel’s in Keokuk IA for fourteen years, retiring in 1989.  He then worked at the B.P. Station in Wayland, MO.

He was a member of Eagles Wings Church in Keokuk, IA.  Patric had been a Deputy Sheriff in Alexandria, MO and had served as the Alexandria Police Commissioner.  He had also served as an Alderman on the Alexandria City Council.   He was a past Vice-President of the Keokuk Jaycees.

He enjoyed riding his Harley and going bowling.  He was very mechanical and enjoyed working on cars and also buying, selling and trading cars.  Patric loved to cook and was given the nickname Chef Pat-T.  But most of all, Patric loved his family and his grandchildren were his pride and joy.

Funeral services will be held at 2 p.m., Wednesday at the Vigen Memorial Home in Keokuk, IA with Reverend Bob Lane officiating.  Burial will be in the Frazee cemetery in rural Alexandria, MO.

Visitation will be held after 1 p.m., Tuesday at the Vigen Memorial Home in Keokuk, IA with the family meeting with friends from 6 – 8 p.m.