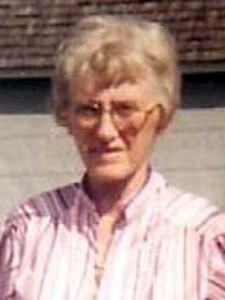 She was born July 11, 1917, north of Newark, Missouri the daughter of Joseph Morton and Lula McKenzie Rudd.

Dorotha was also preceded in death by her parents, three sisters, Beulah Campbell, Evia Hall, and Estyle Klocke, and one brother J.M. Rudd.

Dorotha lived on a farm north of Plevna for several years before moving to Knox City where she lived till her health failed and moved to Knox County Nursing Home and later to Manor Care in Kirksville, Missouri.

Dorotha was employed for Doctor Isom for a while and was a babysitter for several families around Knox City.  She belonged to the Knox City Baptist Church.

She enjoyed gardening, bingo and spending time with family and friends.

Burial was in the Knox City Cemetery.

Expressions of sympathy in memory of Dorotha M. (Rudd) Minor may be made to the Knox City Baptist Church or the American Cancer Society.  Memorials may be left at or mailed to Hudson-Rimer Funeral Home, P.O. Box 1, Edina, Missouri, 63537.  E-mail condolences may be sent to hrimer@marktwain.net