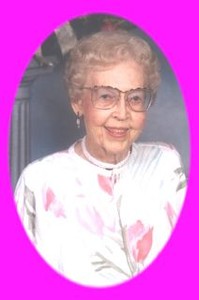 Garland Brown Pohlmann was born December 9, 1915 and died June 11, 2007 at the age of 91. Garland "Peggy" Pohlmann was born in Revere, MO to Roy Miller and Olive Brown Miller. Her mother died shortly after her birth and she was raised by her grandparents Charles P. and Eliza McCabe Brown.

On April 11, 1937 she married Luther Pohlmann in Shelbina, MO and to this union one child, Gregory was born. Luther preceded Peggy in her death on September 25, 1982.

Peggy, as she chose to be called, was active in her community throughout her life. She graduated from Revere High School and then moved to Kahoka where she operated a beauty shop along with her close friend Dorothy White. She helped organize PLAY in Kahoka which was instrumental in improving the city parks. As a member of St. Paul United Church of Christ in Kahoka she spent countless hours doing good deeds for her church and other people. She moved to Quincy, IL in 1994 to the Good Samaritan Home and as a "cottager" she continued to volunteer both at the Good Samaritan Home and at Salem United Church of Christ. Peggy worked on the Patter for many years at Good Samaritan which is their news letter.

As a young child, she discovered a love of music which would lead her to pass this love on to more than 2,500 students through the teaching of piano and organ. She also was the Church Organist and Music Director for St. Paul. She received a certificate of honor for 50 years of service to the church of which she was very proud.

Peggy is survived by her son Greg and wife Jane of Germantown, TN; grandsons, Chad and his wife, Elizabeth of Aurora, IL and their daughter, Peggy’s great granddaughter, Kate Elizabeth, and Ryan and his wife, Jill of Manhattan, IL.

In addition to her parents and husband, she was preceded in death by a sister, Ruth Atha and a brother, Lynn Miller.

Funeral services were held Friday, June 15, 2007, at 1:30 p.m. at St. Paul United Church of Christ in Kahoka with Rev. Kenneth Beckmann officiating. Eulogists on behalf of their father were

Chad and Ryan Pohlmann. Mrs. Ida Ross was organist. Special music, "The Lord’s Prayer" was provided by H L Plenge and "Jesus is My Song of Grace" by the St. Paul Chancel Choir.

Burial was in the St. Paul Cemetery.

Visitation was held after noon Thursday at Wilson Funeral Home with family receiving friends from 6-8 p.m.

Memorials were suggested to the St. Paul United Church of Christ in Kahoka.