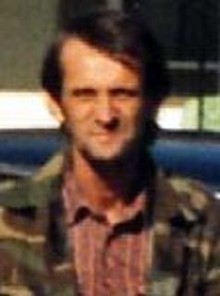 He was born March 31, 1950, at Kirksville, Missouri the son of Leon Wayne and Paul Ann Carlyle Skaggs.

Mr. Skaggs was preceded in death by his father, one brother Robert Leon Skaggs and one sister Nancy Ann Bleything.

William received his education at Brashear, Missouri.  He served his country in the United States Navy.  William was employed with the Florsheim Shoe Factory in Kirksville, Missouri for twenty-seven years.  He enjoyed working on cars, going to the races with his children at Memphis, Missouri and Knoxville, Iowa, music and spending time with his children and his many friends.

A memorial service was held 2 p.m. Saturday June 16, 2007, at the Hudson-Rimer Funeral Home in Edina, Missouri.  The Reverend Allen Davidson officiated the services.  Military rites were held during the memorial service by Knox County Memorial Post #4822 and the Cyril A. Graham American Legion Post #261.

Burial was in the Highland Park Cemetery in Kirksville.