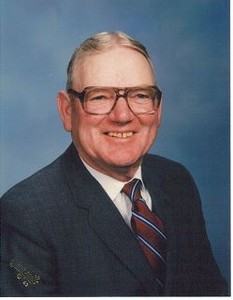 George M. Evermon, 82, of Wyaconda, MO died Wednesday, June 27, 2007 at the Blessing Hospital in Quincy, IL as result of a farming accident.

He was born April 4, 1925 in Clark County, Missouri, the son of Everett and Ester Kautz Evermon.  On December 23, 1945, George was united in marriage to Delila Lipper Evermon in Kahoka, Missouri.  She preceded him in death on October 14, 2004.

George farmed all his life.  He was a true craftsman and even built the house for his family that he was still living in.  He enjoyed playing cards and driving his team wagon of horses.  He especially enjoyed spending time with his family.

He was also preceded in death by his parents, a son Michael Evermon, great grandson and three sisters.

Funeral services will be held 1:30 p.m., Monday, July 2, 2007 at the Vigen Memorial Home in Kahoka, Missouri with Reverend Beryl Cragg officiating.  Burial will be in the Kahoka Cemetery.

Visitation will be held after 2:00 p.m. Sunday with the family meeting with friends from

Memorials may be made to the Kahoka Cemetery.