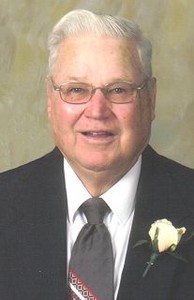 Bill was born on December 16, 1924, the son of Jason Powell and Leona Lousia Bertram See, in rural Knox County, Missouri, at his residence near Colony, Missouri.

He was a life-long resident of Knox County where he attended grade school in Colony before graduating from the LaBelle High School in the class of 1943. During his school years Bill was active in both basketball and baseball and in 1957 he won the National Singles Handicap Bowling Championship in Detroit, Michigan.

Bill began his Masonic Membership with Colony Masonic Lodge #168 in 1948, served as Worshipful Master in 1975 and 1976, and received his 50 year pin in 1998. He was also a member of the Colony United Methodist Church until it closed at which time Bill and Jewel transferred their membership to the Colony Baptist Church.

On May 24, 1957, in New London, Missouri, Bill married Jewel Ewalt and they celebrated 50 years together earlier this year.

They lived their life in the Colony, Rutledge, and Gorin area where they were engaged in farming. His hobbies included all kinds of sports, fishing, hunting, gardening, and water sports but most of all he loved spending time with his grandchildren and family.

Bill was preceded in death by his parents, three brothers, Dayton, J.B. and Leonard See and a sister, Maxine See Bozarth.

Burial with Military Honors, by Knox City American Legion Post #358, will be in the Colony Cemetery in Colony, Missouri.

Reverend Steve Jarvis will officiate and music will be provided by the Jim Campbell and Becky Zahn. Casket Bearers will be his grandsons, Patrick Goucher, Timothy See, Justin Wheeler, Aaron Gibbs, Nathen See and Will See.

An expression of sympathy in memory of Bill See may be left to the Colony Masonic Lodge or the Colony Baptist Church. A memorial may be left at or mailed to the Doss Funeral Home 208 N. 4th Street, Edina, Missouri 63537.