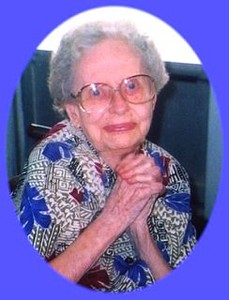 She was born near Fairmont, MO, in Clark County, on September 2, 1915, a daughter of Charles Edward and Virginia Dare Spicknall.

She went to Fairmont grade school and graduated from Kahoka High School in 1934.

She was preceded in death by her parents; her husband; a brother, Ralph Spicknall; the Feldman in-laws; a son-in-law, Eddie Hull; a grandson, Alan Lane Hull; and a nephew, Max Logan.

Ray and Hazel lived on several rented farms until moving to their own farm east of Wyaconda, MO in 1961. Then for health reasons, they moved to the Senior Housing in Wyaconda and lived there for three years. After retiring in 1978 from being a cook in the Wyaconda school, Hazel worked in the Wyaconda Café for awhile. For several years afer that, she cared for several different people in their homes, including her mother-in-law for almost a year.

Ray and Hazel’s home was always open for anyone needing a place to stay for a short time.

Funeral services were held Saturday, July 7, 2007, at 10 a.m. at Wilson Funeral Home in Kahoka with Larry and Ilene Howell officiating. Special Music "Till the Storm Passes Over" and "Less and Too Late" was by John Spray.

Burial was in the Etna Cemetery.

Visitation was held at Wilson Funeral Home after 9 a.m. Friday with family receiving friends from 6-8 p.m.