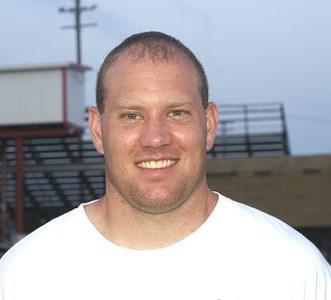 First year Knox County R-I teacher and coach John Weaver recently participated in Knox County’s middle school football camp. Weaver has been helping lead Eagle athletes in off season conditioning since moving back to the area from Olathe, Kansas. Coach Weaver shared some of what his background as a championship level athlete and his work as a personal fitness trainer can bring to the Eagle program.

“I think the biggest thing is work ethic,” said the 1998 Clark County R-I graduate. “The coaches we had (at Clark County) helped teach me how to win, how to work hard and what it takes in the off season. It’s not only November to March, but what you do in the off season to make yourself better individually and as a team.”

“The dedication and commitment you learn in the past stick with you,” said John Weaver. “I am trying to carry that on to this program.” Knox County has not won more than ten varsity girls’ basketball games in the last 15 years. Current KCHS girls’ basketball players have had a different head coach in each of their school years.

John Weaver was part of a dominant Clark County Indian boys’ basketball program and won numerous gold medals in track.  Younger brother Jeff Weaver was a state champion high jumper, at Clark County. Jeff Weaver went on to star for the US Military Academy at West Point track team and is currently serving our country in Iraq.

“The biggest thing is that you have to have basketball skills and athletic skills,” said John Weaver. “You have to have both those skills individually and as a team. We have been bringing that to the table in the weight room this summer. We have been working on form and technique. I want to make sure they know what they are doing and why.”

“I want to help them become a better basketball player and a better athlete. A lot of that relates to education and teaching. When the kids know what to do they can teach others. We will get stronger and faster. That will lead to bigger and better things this year.”