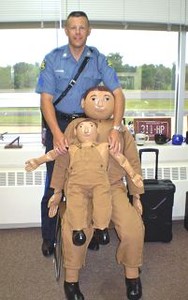 MACON – The Missouri Coalition for Roadway Safety’s North Central Region recently purchased a new set of roll-over dummies for Troop B of the Missouri State Highway Patrol for use with their roll-over simulator.

Each year Sgt. Brent Bernhardt, Public Safety Officer with Troop B, takes the simulator around the Troop’s area to various schools, organizations and groups demonstrating what happens in a roll over accident when you are not wearing your safety belt.

Unfortunately for the poor dummies, they are placed in the simulator, which looks like the cab of a pickup, without any safety belts. When Sgt. Bernhardt turns the machine on, you can imagine what happens, the dummies whirl around inside and at times fly right out the opened window.

Brent’s original dummies were very old and worn having been stitched up numerous times. It’s no wonder with the treatment they get! The Coalition purchased the new dummies for Brent at a cost of $1,700.00. This money is well spent considering how many people from small children to older adults see the demonstration each year. If even only a few of the folks who see the demonstration start wearing their safety belts as a result, it’s well worth the time Brent devotes, and the money spent by the Coalition.

The new materials and durable construction of the new dummies should ensure many spins for years to come.

The Missouri Coalition for Roadway Safety’s is comprised of many partners across Missouri who have banned together in an effort to reduce fatalities on Missouri’s roadways to 1,000 by 2008. For more information on the efforts of the Coalition, or to become a member, visit our website at www.savemolives.com.