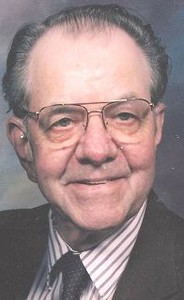 He was preceded in death by his parents; two brothers-in-law, Raymond Marble and Albert Phillips and one sister-in-law, Madelyn Patterson.

Alva was reared north of Brashear, Missouri, attending the Brashear schools and graduating from Brashear High School with the Class of 1939.  He went to Chicago, Illinois and worked, came back and worked in West Burlington, Iowa for the railroad in the engine shop.  Alva enlisted in the United States Navy in September 1942 serving as Gunnersmate 3c on the U.S.S. Arkansas.  Seeing action at Normandy, Cherbourg, Southern France in the Atlantic Theater and Iwo Jima and Okinawa in the Pacific Theater.  Being discharged in November 1945.  After the service he returned to West Burlington where he worked in the railroad shops.  After his marriage he continued to work at the railroad and later for J.I. Case.  In 1952, he and Genevieve moved back to the family farm north of Brashear, Missouri.  Alva raised registered black angus cattle until he became disabled and in 1969 they moved to Kirksville, Missouri.

Alva enjoyed building little wagons to pull behind the lawn mower to haul his grandchildren.  He was very creative and enjoyed doing work around the house and making many things.  He was a member and past master of Paulville Lodge #319 and a member of Colony Masonic Lodge #168 A.F. & A.M.; V.F.W. Post #2508; former member of the Moose Lodge and he attended the First Assembly of God Church in Kirksville, Missouri.  Alva loved to sing “Big Rock Candy Mountain” and also read to his children and later his grandchildren.

A funeral service will be held at 2:00 p.m. Wednesday, August 15, 2007, at the Davis-Playle-Hudson-Rimer Funeral Home with Reverend Virgil Clow officiating.  Music will be provided by Dianthe Cable, organist and Karen Chisholm, soloist.  Burial with Military Rites will be in the Park View Memorial Gardens in Kirksville, Missouri.

Those who wish to express their sympathy in the form of a contribution can do so to the Arthritis Foundation or to donor’s choice.  Contributions may be left at or sent to Davis-Playle-Hudson-Rimer Funeral Home, 2100 East Shepherd Avenue, Kirksville, MO  63501.