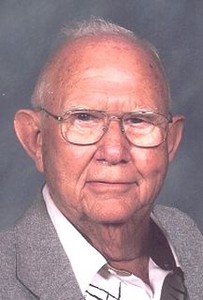 Johnson Cloud.  On December 8, 1940, he was united in marriage to Thelma Doris Clatt in Wyaconda, MO.  She survives.

He was preceded in death by one daughter, Anita Cloud Corvaia.

Morris enlisted in the United States Navy in May 1939 and served aboard the USS Nevada at Pearl Harbor on December 7, 1941 and served in the Aleution Campaign Invasion of Attu Island.  After attending a training school in Washington D.C. he served aboard the USS Shelikof at Enewetor, Saipan and Okinawa.  He was honorably discharged as a Fire Controlman First Class in October of 1945.

He had been employed with General Mills in Keokuk, IA and worked during the startup of the Henkel Corporation Plant.  He retired in 1982 after 37 years of employment.

He was a member of the St. Paul United Church of Christ in Keokuk, IA.

His hobby was flying and he pursued this hobby for over 20 years, working part-time as a flight instructor for Lindner Aviation in Keokuk, IA.

Funeral services will be held at 10 a.m., Wednesday at the Vigen Memorial Home in Keokuk, IA with Reverend Geoffrey Mitchell officiating.  Burial with military rites will be in the Keokuk National Cemetery.

Visitation will be held after 1 p.m., Tuesday at the Vigen Memorial Home in Keokuk, IA with the family meeting with friends from 6 – 8 p.m.

Memorials may be made to the St. Paul United Church of Christ Service Circle.