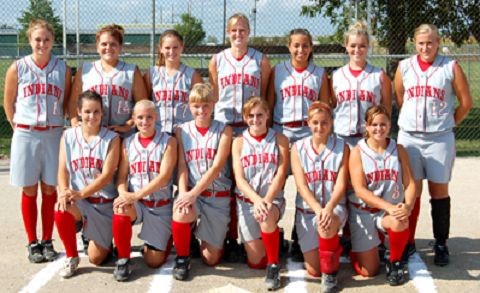 New Positions For Many  Lady Indians In 2007
Coming into the 2007 season, Lady Indian softball coach Denise Martin faced a big question–How do you replace a stellar athlete like  Courtney Shuman?
“We have a lot of talented kids this year,” said Martin
Softball fans will see a lot of familiar faces on the team in unfamiliar positions as the 2007 season kicks off.
Senior Kassidy Shuman has moved out from behind the plate to replace Courtney at shortstop.
“Kassidy is probably quicker on her feet, and has a better arm than Courtney,” Martin said.  “But we will miss Courtney’s hitting.”
Morgan Bertelli has taken up position behind the plate, catching for the Lady Indians.  Emily Stewart will work first or third base, and Brenna Buford will play second or shortstop as needed.  Cady Flood, an outfielder last year, has had some early season time at third.  Caitlyn Davis, Britni Bertelli, Brianna Alderton and Rachel Daw make up the outfield
“A very pleasant surprise has been how well Brooke Wheeler has pitched so far,” said Martin.
After two games, Martin is pleased with the team’s defense.
“We have to be more aggressive hitting though,” she cautioned.
The Lady Indians face Monroe City and Brookfield at home this week.  Come out and take in a game.