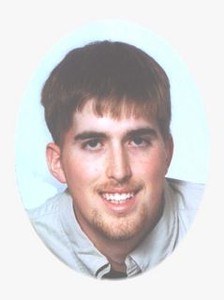 Joel Eric DeRosear, age 22, of Kahoka, MO, died peacefully at his home on Tuesday, August 28, 2007, following a three and a half year battle with cancer.

Survivors include his parents, Eric and Walla DeRosear of Kahoka MO; grandparents: Dwight and Joan DeRosear of Memphis, MO, and Weldon and Edra Beach of Leonard, MO; aunts and uncles: Bridget and Dr. Robert Megna of Forney, TX, Ann and David Gray of

He was preceded in death by his grandfather, Waldo Gaines and family friend, Bill Williamson.

Joel was salutatorian of the Clark Co. R-1 High School class of 2004. While in high school he was a member of the Clark Co. R-1 Marching Indians, F.F.A., and a member of the Trap Team. He was a senior at the University of Missouri, College of Agriculture, where he was historian and a member of AG Systems Management Club, Alpha Mu Honor Society where he served as Rush chairman, Independent Aggies where he was currently Seargent of Arms, and also Vice President of John Deere Management Club.

Since he was a young boy, Joel always loved being outdoors. He worked most summers farming with Billy Early and the rest of the time was spent at Baring Lake which he loved so much with his family and friends. He was an avid sportsman and loved to hunt and fish and shoot trap. Joel was a friend to everyone, young or old and at the same time was comfortable in his solitude. He never let cancer get the best of him and he never gave up hope.

Catholic Church in Baring, MO with Fathers Paul Hartley and Bill Cottonstette officiating. Burial will be in the St. Aloysius Cemetery, Baring, MO. A celebration of life and sharing of memories will follow burial at the Baring Country Club clubhouse.

Friends can call at Wilson Funeral Home in Kahoka after noon on Thursday with a Knights of Columbus Rosary being recited at 4 p.m. followed by family receiving friends until 8 p.m.

Memorials in lieu of flowers are requested to the Clark Co. Marching Indians or Blessing