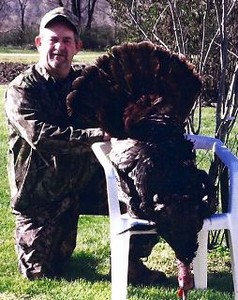 Danny K. Hall, age 58, of LaBelle, Missouri died Monday, August 27, 2007 near Macon, Missouri as the result of a vehicle accident.

Born in Knox City, Missouri on September 13, 1948, he was the son of Donald and Leatha Jean Menke Hall.

He married Laura Turpin on January 13, 1968 in Lewistown, Missouri and she survives.

Danny was a graduate of LaBelle High School and a member of the LaBelle Baptist Church.  For many years, he was LaBelle boys and girls softball coach, 4-H project leader, expert gardener, avid sportsman and member of the National Wild Turkey Federation.  He especially enjoyed hunting with his grandchildren and was an exceptional husband, a great father, grandfather and a great best friend.  For 25 years he was employed with Mastertank in Quincy, Illinois, and with Manchester Tank, both in Hannibal, Missouri and Quincy, Illinois for over twenty years.  He was currently C.E.O. of C.C. Inc. of LaBelle, Missouri.

Funeral services were held at 2 p.m., Friday, August 31, 2007 in the Coder Funeral Chapel with Reverend Lance Bonnell officiating.  Burial was in the LaBelle Cemetery.

Memorials may be made to the LaBelle Nutrition Center or Hospice of Northeast Missouri and may be left at or mailed to the Coder Funeral Chapel, P.O. Box 151, LaBelle, Missouri 63447