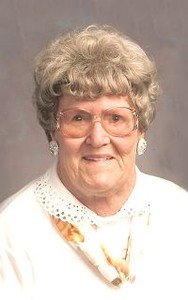 The daughter of John Spencer and Mary Mongrieg Nash, Helen was born May 19, 1915, in Cicero, Illinois.

Helen united in marriage with Arthur Wayne Cunningham on August 8, 1936, in Cicero, Illinois. He preceded her in death July 11, 1989.

Mrs. Cunningham worked as a cafeteria supervisor at St. Mary Hospital, and with Quincy Paper Box.   From 1944 to 1957, she and her husband operated a grocery store in LaBelle, Missouri, with Myrtle Henry.  A member of Central Baptist Church, Helen was a volunteer at St. Mary Hospital. She was active with the Senior Center Crafts and loved watching Pro-basketball, crocheting and family gatherings, particularly ones with her grandchildren.

Her parents; a brother, Spencer Nash; a sister, Ruth Schuler; a daughter-in-law Janice Cunningham; and a great granddaughter Hannah Hartsock all preceded her in death.

The Rev. Ivan Grueter officiated for services on August 31, 2007, in Hansen-Spear Funeral Home, in Quincy.  Entombment was in Quincy Memorial Park Mausoleum.

Expressions of sympathy may be made in memory of Helen M. Cunningham in Memorials to Blessing Foundation for Hospice or the Senior Citizen Craft Center would be appreciated. Hansen-Spear Funeral Directors are in charge of arrangements.