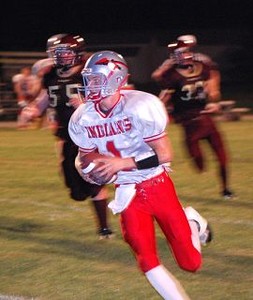 The Clark County Indians rolled up 357 total yards against only seven net yards for the Schuyler County Rams on their way to a 47-0 road victory on Friday evening, September 7.
Clark County won the opening toss, and elected to receive the kickoff  The Indians opened with a long Javis Vineyard run, and a Ram face mask penalty gave the Indians the ball on the Schuyler seven yard line.  Erick Arnold finished the drive with a five-yard dash into the end zone.  Ryan Roberts’ kick was good, and the Indians were up 7-0 with 10:35 left in the first quarter.
The Indian defense held the Rams to a loss of yards, and forced them to punt from deep in their own territory.  Big plays continued to help the Indians throughout the game, and this time Vineyard took the punt back to the Ram 13 yard line, scoring on the next play with 8:06 remaining in the first.
Byran Plenge ended the next Ram drive with an interception on the Indian 45 yard line.  After the Rams sacked QB Ethan Allen, he bounced back with a pass to Vineyard, who then raced 60 yard for his third TD of the night, giving the Indians a 20-0 lead with 6:33.
The Rams threatened to score, but the Indian defense held, forcing a short punt, and the Indians took over on their own 20 yard with only 45 seconds remaining in the first quarter.  Seconds later Vineyard raced 80 yards for another Indian TD, and the Indians led 27-0 at the end of the first quarter.
The Indians wouldn’t score again until Allen connected with Rob Schutte  with a 53 yard TD pass midway through the quarter, and the Indians took their 34-0 lead into halftime.
In the second half, the Indians added yet another TD from Javis Vineyard, this time a 41 yard run with 4:37 left in the third.
With the Indian reserve players in late in the game, QB Justin Oilar led the team to the only score of the final period, a TD by Tyler Simpson with only 4:26 remaining in the game.
Clark County gained 183 yard rushing on 27 carries, and went 6-14 for 174 passing yards.
The Indians will face Milan at home Friday night in another Tri Rivers Conference matchup.