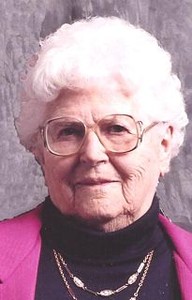 A daughter of Albert and Laura Minor Weitman, Alberta was born March 16, 1915, north of LaBelle, Missouri.  To this union, one son, Ronnie was born.

Alberta Weitman united in marriage with Clarence Richardson on September 21, 1933, in Monticello, Missouri.  He preceded her in death on January 24, 1979.

Having attended Government School, Alberta was a member of the First Christian Church of LaBelle, Missouri.  A farm wife of many years, Alberta was a charter member of the Merry Makers Extension Club founded in 1936.  For several years she was employed as a cook for the LaBelle School, later serving as a Foster Grandparent with the LaBelle Head Start Program.

Alberta enjoyed spending time with her family, visiting friends and neighbors watching local ball games, cooking, crocheting and was known to be an excellent card player.  She was an active worker for the LaBelle Nutrition Center and served as a member of the LaBelle Harvest Fest Committee.

Expressions of sympathy may be made in memory of Alberta Richardson to the LaBelle Ball Association or the LaBelle Senior Center and may be mailed to or left with Coder Funeral Chapel, P.O. Box 151, LaBelle, Missouri 63447.