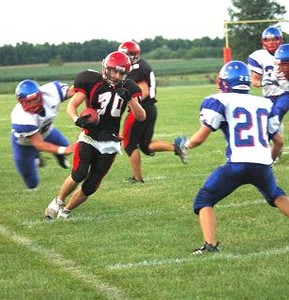 Scotland County (0-2, 0-1) damaged their chances with turnovers. The Tigers put the football on the ground at least three times, losing a fumble on their opening possession.

Jacob Moots recovered the ball on the Tiger 24 yard line setting up a Knox County touchdown. The Eagles executed a sharp looking halfback option pass. Cody Morgenstern was wide open in the end zone. Zach Parrish made no mistake and found Morgenstern for a touchdown with 8:18 remaining in the first quarter.

Knox County (2-0, 2-0 in the Tri-Rivers Conference) was successful on two point conversions after four of their five touchdowns. Zach Parrish lined up as a kicker on the PAT and passed to Keenan Gillaspy for an eight point Eagle edge.

The Tigers mounted a drive to the KCHS 25 yard line. The Eagles stiffened and wrested the ball back on downs. Defense ruled much of the first half. Knox County led by the 8-0 margin after one period of play.

The home team began to take over the football game midway thru the second quarter. The Eagles mounted an 80 yard drive, capped by Keenan Gillaspy’s one yard quarterback sneak at the 2:57 mark of period two. Zach Parrish ran in the two point conversion for a 16-0 KCHS lead.

Knox County had good pressure on Tiger quarterback Kyle Shelley most of the game. Dennis Dent picked off his second pass of the season on the Knox County 43 yard line with 2:06 remaining in the first half.

“We know that defense wins championships. We take our heart and soul into playing defense,” said Dennis Dent. “We have been working on our defense in practice and it is starting to pay off. What we want to do is get better. We put a lot of time and effort into the weight room. It really helps get stronger and more confidence.”

“We wanted to start out 2-0 and get to Brookfield,” said the KCHS junior defensive back. “We have been working really hard to get to the next level.”

The Eagles cashed in their opportunity. Lucus Hudson raced to the Tiger two yard line, setting up Keenan Gillaspy to follow his offensive line into the end zone with 48 seconds remaining in the first half. Lucus Hudson made a great play holding on to a two point pass from Gillaspy. Knox County led 24-0.

Knox County’s defense jumped on another Tiger fumble at the 28 yard line with 35 seconds remaining in the second quarter. Scotland County got fired up and kept the Eagles off the board. The teams went to the dressing room with Knox County sitting on top of a 24 point lead.

The Eagles held a 226-50 yard advantage in total yards from scrimmage in the first half. Knox County had 15 first downs to three for Scotland County at the half. The Eagle offense had good balance all night.

Knox County took the second half kickoff and promptly marched 59 yards to pay dirt. Tristan Lonberger hauled in a 35 yard pass highlighting the drive. Keenan Gillaspy capped the drive with a one yard quarterback sneak with 8:12 to play in the third quarter. The two point run failed and the Eagles led 30-0.

The Eagles continued their defensive supremacy, stalling Scotland County on the midfield stripe without a first down. Knox County chewed up the clock, taking the football with 6:44 remaining in the third quarter.

“Hats off to Knox County,” said Tiger head coach Brent Bondurant. “We stopped ourselves. We fumbled the ball on the first play from scrimmage and couldn’t stop them defensively. We couldn’t get anything going offensively. It is embarrassing to practice as hard as I thought we did and come out and put out an effort like that.”

“Last week we didn’t turn the ball over at all,” said Coach Bondurant. “This week we had two bad snaps on the ground. We had a pick.  I thought the fumbles were inexcusable, especially on a straight handoff. We didn’t show up to play. We are either going to get used to this, or we are going to do something about it.”

The Eagles played pretty well with several JV players in the game. Davin York gained 25 yards on three carries and Ben Harder rushed twice for 14 yards. Cody Morgenstern entered the game at quarterback after Keenan Gillaspy banged his throwing hand off a helmet.

Knox County finished the game with 20 first downs. The Eagles did not turn the ball over while collecting two fumbles and an interception. The Eagles had three penalties for 20 yards compared to four flags for 20 yards on their guests.

Zach Parrish was 2-2 passing for 23 yards, a touchdown and a two point pass. Keenan Gillaspy completed 12 passes out of 22 tries for 134 yards unofficially. Five different KCHS receivers hauled in passes.

Knox County has one of their tougher assignments when Brookfield (2-0) comes to Ella Campbell Field for another Tri-Rivers Conference match up on September 14. The Bulldogs defeated arch rival Marceline 19-9 in the Bell Game for their second straight victory.

Knox County retained the Clyde Trophy. “We have had two games to get going and work out the bugs,” said Knox County coach Steve Ramer. “We were able to get victories. From game one to game two we have gotten better. We have one of the dominant teams in the area to play in Brookfield. They have been to the state playoffs for ten years in a row.”

“We need to fix our little things, come out and play four solid quarters of football,” said Ramer. “Defense was solid tonight for four quarters. We know we can’t give up as many points as we gave Schuyler County and win. Our defense has been about swarming and causing turnovers. That’s what we did tonight.”

“We only gave up one (quarterback) sack tonight,” said Ramer. “Lucus Hudson is another weapon for us. If teams are going to cheat on Zach (Parrish) we have got (Hudson). He came up big and proved we have other people out there.”

“We went up by the 8-0 score. A couple of big plays by (Lucus) Hudson and we go in. We never look back,” said Coach Ramer. “For the kids, this proves were are not at the bottom of the (conference) anymore. We are above the bottom of the bucket. Where we set, we will find out next week,”