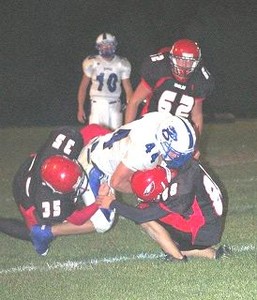 Brookfield remained unbeaten on the 2007 season with a 41-8 varsity football victory at Knox County on September 14. Dustin White rushed for 101 yards and scored four touchdowns leading the hard nosed Bulldog running game. Colby Bailey scored twice during the first half for Brookfield.

Knox County (2-1, 2-1) battled the entire game, but was simply overpowered by a bigger and stronger opponent. The Eagles could not move the football on offense, managing only two first downs against the Brookfield varsity defense.

Brookfield led 21-0 at the half. The Bulldogs used a double tight power formation to rumble 151 yards with 12 first downs during the opening two periods. Brookfield statistics showed just over team 350 rushing yards. The Bulldogs went 1-6 in the passing category for six yards and a Zach Parrish interception.

The KCHS interception came after Brookfield senior Bryan Severa picked off a Keenan Gillaspy aerial and returned the football nearly 20 yards to the Knox County 32 yard line with 2:35 remaining in the first half.

The Eagles overcame Brookfield’s blitzing pressure defense and completed a 32 yard hook and lateral pass to Lucus Hudson during the first half. The move took pressure off a beleaguered Knox County defense.

“I thought Knox County kids played with more enthusiasm than anytime in my time at Brookfield,” said Bulldog coach Shane Cavanah. “I thought they played hard for 48 minutes. They are going to win more games than they lose. We controlled the line of scrimmage, but they didn’t lay down and die.”

Tristan Lonberger ran a second half kickoff back to his 40 yard line. One of the Brookfield defenders stripped the ball away. Colby Bailey was a Brookfield special teams standout all night. Bailey recovered the football on the Eagle 40.

Knox County stood tall on defense and forced Brookfield’s second punt of the contest. The Eagles could not move the football and punted. Bryan Severa displayed his reputation as one of the top kick returners in the area when he raced 43 yards to the Knox County 11 yard line.

Brookfield (3-0, 2-0) cashed in their good field position and eventually took a 41-0 lead. Brookfield employed their JV the final nine minutes of the contest. The Bulldog junior varsity has a 300 pound lineman, and could probably beat a lot of Class 1 football teams.

Knox County drove the football 92 yards and crossed the goal line when Keenan Gillaspy found Lucus Hudson for an Eagle touchdown at the 4:11 mark of the fourth quarter. Gillaspy passed to Zach Parrish for the two point conversion.

Brookfield held a 25-5 advantage in unofficial first downs at the end of the contest. Knox County had two turnovers and Brookfield one. Lucus Hudson punted four times for a 28.25 yard average. Brookfield was forced to punt twice during the contest.

Knox County rushed 23 times for 78 yards on the night. Zach Parrish was 18-79 in the rushing category. Brookfield had 57 carries for about 350 yards.

Keenan Gillaspy was 7-16 for 84 passing yards with a touchdown pass and one interception. Lucus Hudson led all receivers with four receptions for 72 yards and a score. Cameron Kirmse had a catch for 11 yards. Zach Parrish had two receptions for one net yard and a two point conversion. Knox County had 162 total yards from scrimmage.

“They just ran over us up front,” said Knox County coach Steve Ramer. “They manhandled our linemen. It comes down to not making big plays. We dropped a few balls. We fumbled a 40 yard kick return. If you make some big plays you make a game out of it.”

Knox County takes their improved football team on the road to winless Westran next week. The Hornets employ a spread offense and throw the football. “It is a new offense for them,” said Coach Ramer. “I think you will see a better Westran football team every week. We have to get off this (the Brookfield game), get it off our mind and get ready to play.”