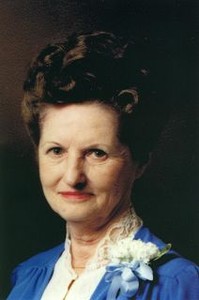 The daughter of William Nelson and Fern McKown Hinkle, she was born November 2, 1918, in Lewis County, near Lewistown, Missouri.

On December 14, 1935, at Edina, Missouri, she was united in marriage to William H. Perry and he preceded her in death in 1967.  She was employed for several years as a nurse for Dr. C.C. Gibson of Edina.  Later she became a dental assistant for Dr. Nelson Kapfer of Baring and Kirksville and for Dr. Charles A. Robertson of Kirksville, Missouri.

On March 16, 1968, she was united in marriage to Leonard Hughes.  The lived on their farm southeast of Brashear and retired in the spring of 1989 and moved to the Senior Housing in Brashear.  He preceded her in death on December 31, 1996.

Funeral services were held Saturday September 15, 2007, at the Hudson-Rimer Funeral Home in Edina, Missouri.  The Reverend Robert Shobe was officiate for the services.

Burial was in the Eucebia Cemetery west of Novelty, Missouri.

Musical selections included “Take My Hand Precious Lord” and “One Day At A Time”.

Casket bearers were her nephews.

Visitation was Friday September 14, 2007, at the Hudson-Rimer Funeral Chapel in Edina, Missouri.

Expressions of sympathy in memory of Ethel Gertrude Hughes may be made to the American Heart Association.  Memorials may be left at or mailed to Hudson-Rimer Funeral Home, P.O. Box 1, Edina, Missouri, 63537.