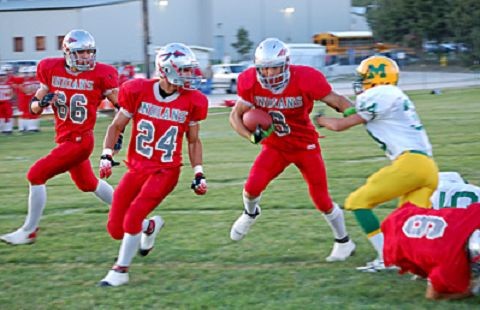 The Clark County Indians remained undefeated after hammering the Milan Wildcat 34-2 at the Clark County Activity Field on Friday night, September 14.
The Wildcats  won the toss, and elected to receive.  The Indian defense stopped Milan’s first drive, forcing a punt to the Indian 20 yard line.  The Indians worked their way upfield with a mixture of rushing and passing, including an amazing over shoulder catch by Matt Morrow. The Indians scored on a 2 yard run by Bryan Plenge with 7:23 remaining in the first quarter.
The Wildcats started their next drive on their own 8 yard line, before being forced to punt again.  This time, QB Ethan Allen scored  on a seven yard rush with 4:05 remaining in the first.  Ryan Roberts second kick of the night was good, and the Indians led 14-0.
The Indians would score one more time in the quarter, a Allen picked off a pass and raced 55 yards for the score with just 12 seconds remaining in the quarter.
The Indian offense sputtered in the second quarter, and the Indian were forced to punt the ball away.  But the Indian defense held strong, forcing a Milan punt to the one-half yard line.  The Indians moved the ball a little, but a bad snap led to a safety, and Indian lead was cut to 20-2.
The Indians added two second half touchdowns to put the game out of reach of the Wildcats.
Javis Vineyard scored on an 11 yard run with 6:31 left in the third quarter, and Erick Arnold scored on a 1 yard run with 6:58 remaining in the game for the 34-2 victory.
The Indians rolled up 207 yards rushing and 106 passing for a total of 313 yard, while holding the Wildcats to only 81 yards on the ground.  Penalties were a problem for the Indians, who were flagged 13 times for 85 yards.
The Indians will travel to Brookfield Friday night to face the always-tough Bulldogs, who posted a 41-8 victory at Knox County Friday.  The Bulldogs had over 350 yards of rushing in the contest, and completed one of six passing attempts for six yards.