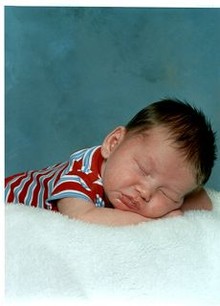 “Connor was our precious baby boy that will always be remembered by his smile.  He brought so much love into our hearts; he was our sunshine; he will never be forgotten.”

Survivors include his parents; a brother, Preston, of the home; grandparents, Denise and husband Scott Ebling of Memphis, Rick and wife Diane Phillips of Port St. Lucie, FL, Christine and husband Robert Wagner of Cape Coral, FL, and Larry Carter of Ft. Myers, FL; great grandparents, Joyce and husband Robert Carpenzano of Gorin, Janie Ebling of Memphis, Mary Miller of Lafayette, GA, and Jose and wife Lola Sanchez of Ft. Myers, FL; the Ebling-Monroe family, the Miller family, the Carter family, the Harris family, and the Sanchez family; and many aunts, uncles and cousins.

Funeral services were held at 11 a.m., Thursday, September 27, 2007, at the Presbyterian Church in Memphis, MO, with the Reverend Charles McCracken officiating. Special music was provided by LaMayra Brown, soloist, and Kathy Campbell, organist. Family members served as pallbearers. Burial was in the Gorin Cemetery, Gorin, MO.

Memorials were suggested to the family and can be left at or mailed to the Gerth Funeral Service, 115 S. Main St., Memphis, MO 63555.