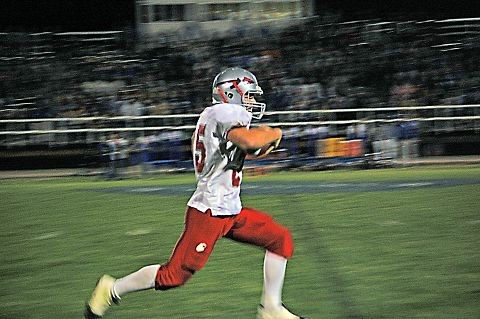 The Clark County Indians wrapped up the 2007 Tri Rivers Conference  championship title, downing the Putnam County Midgets 28-0 in Unionville Friday night, October 12, to close out a perfect 7-0 conference season.
The score was not indicative of the game, and the Indians at times struggled to subdue the tenacious Midgets, who were looking to upset Clark County on their Homecoming night.
Clark County won to opening  toss of the game, and elected to receive the kickoff.
Javis Vineyard took the kickoff around the 20, and was finally stopped about midfield.  With quick passes from QB Ethan Allen to Vineyard and Matt Morrow, the Indians moved inside the Midget 15 yard line.  Vineyard got the Indians a first down on the one-yard line before scoring the first Indian TD, and after Ryan Roberts kick, the Indians led 7-0, with 10:05 on the clock.
The Midgets came back, gaining a couple first downs with the help of Indian offsides penalties, but the the Indian defense stiffened, with passes being broken up by Allen and Roberts, forcing the Midgets to punt.
The Indians Indians started their next drive on the 30, and moved into Midget territory before turning the ball over on downs on a 4th and short incomplete pass.
The Midget possession lasted only four play, including a Michael Brennan sack of QB Levi Miles.
The Indians got the ball back at their own 36, as Vineyard called a fair catch on the punt.A pair Vineyard runs gave the Indians a first down, then Allen connected with Rob Schutte on the Midget 35 with just seconds remaining in the first quarter. A pair of penalties backed the Indians up, to the 44.
Allen completed a big pass to Colt Sommers to the 21 yard line, and then the Indians drove all the way to the two yard line before begin stopped, and the Indians turned the ball over on downs again with 9:02 left in the half.
The Midgets moved the ball upfield, but a Cori Seth sack followed by a good open field tackle by Bryan Plenge as a Midget received tried to leap over him ended their drive.
Vineyard took the punt on the run, and raced to the Midget 21 to give the Indians outstanding field position to start their next drive.  But Allen’s pass was intercepted by Jon McCoolom and returned to the 23 yard line.
Clark County coaches wanted a ground call on the next play, as Lynn Williams and other Indians had Midget QB Levi Miles wrapped up while he threw the ball into the ground.  But the call was an incomplete pass, and the Midgets took advantage, moving up the field deep into Indian territory before Ethan Allen picked off a Midget pass.
The Indians drove to the goal line, as Allen connected with Sommers with 2.8 seconds left in the half, but the Indians were stopped, and the half ended with a surprising 7-0 Indian lead.
The Midgets came out in the second half, driving quickly to the Indian three yard line before Erick Arnold scooped up a Midget fumble and rumbled ninety-plus yard  for a huge momentum-shifting Indian touchdown with 9:51 in the third quarter, giving the Indians  a 14-0 lead.
The newly fired-up Indians stopped the Midget possession, and got the ball back with 8:53 on the clock.
Allen completed a pass to Schutte, and on the next play kept the ball himself before getting tackled at the Midget 11.  Vineyard scored on the next play to give Clark County some breathing room.
With the wind now out of the Midgets sails, their offense struggled, and were forced to punt again from deep in their own territory.
The Indians  scored after Ryan Roberts opened a hole for Vineyard, and he showed his speed, racing 21 yards for the score, and the Indians now held a comfortable 28-0 lead with 3:47 left in the third period.
The Indian defense denied the Midgets any opportunity to score in the final quarter, as the offense worked the clock, keeping the ball in bounds and the clock running.
Clark County picked up 364 yards of offense, 159 passing and 205 rushing yards against a very determined Midget defense, while allowing only 160 yard for Putnam County
The Indians earned 21 first downs against Putnam County’s 12
The Indians return home next Friday, October 19, for the opening of district play, as the Indians host Monroe City.  The Indians will then travel to Palmyra on October 26, before returning home to host Highland.