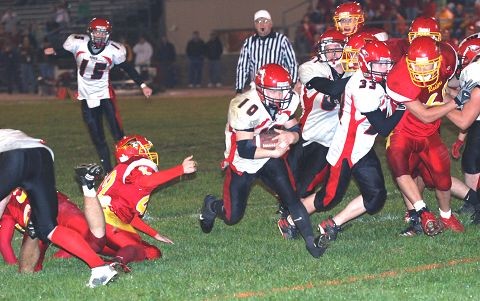 for a 22-21 Knox County lead.
Both sides battled to the final gun. The Raiders took the ball on their 14 yard line. The Eagles bottled the Raiders up even more with a quarterback sack.
Daniel Jones got the Raiders out of the field position hole  with a 53 yard dash with 39 seconds to play in the game. Zach Parrish and Keenan Gillaspy helped save the game with a down field tackle. Jeremy Hudson pressured North Shelby’s quarterback into an incompletion on the Eagle 10 yard line.
North Shelby moved the ball to the Knox County 20 yard line with eight seconds remaining in the game. Freshman Jesse Christoffer lined up for a game winning 37 yard field goal on first down. North Shelby’s kick holder made a great play to get a low snap in position.
Knox County senior Ethan Hustead laid out and blocked the kick. The Eagles ran out the final four seconds for a thrilling 22-21 victory. Knox County guaranteed at least a .500 season, and kept their district hopes alive.
"Our offense had a let down in the second half," said North Shelby coach Terry Ahern. "Knox (County) came out fired up and ready to defense us in the second half. We ran the ball hard in the second half. We played hard. We let a couple of things get to us in the second half. We just didn’t get the big plays we needed to sustain a drive."
"The kickoff hurt us," said Coach Ahern of the final Raider offensive possession. "This game is a matter of inches. If it wasn’t for one (defensive) guy we could have scored on two plays. We didn’t tackle well in the second half. (Zach) Parrish just slid off of us.. Special teams situations hurt us."
The Eagles have to win at defending Class 1 football champion South Shelby and North Shelby must defeat Paris for Knox County to advance to the playoffs for the first time since 1995. South Shelby held on to beat Paris by one point, 28-27. The Coyotes missed a fake extra point kick late in the game.
Knox County (5-4, 4-3 in the Tri-Rivers Conference) rushed 44 times for 346 yards on the night. The participating schools provided statistics contained in this story unless noted.
Zach Parrish led all ground gainers with 36 carries for 265 yards and two touchdowns. Kane Simmons had one try for 40 yards. Cameron Kirmse went 4-23 on the ground. Keenan Gillaspy had one carry for 14 yards.
Daniel Jones rushed 22 times for 176 North Shelby yards. Curt Hubbard gained 83 yards on ten carries and a touchdown. North Shelby had 35 rushing attempts for 259 yards. Alex Thrasher was 5-10 for 94 yards passing with two touchdowns and one interception. Knox County was 3-7 passing for 18 yards.
Alex Daniel had two catches for 59 yards and a touchdown. Curt Hubbard caught two balls for 29 yards and a North Shelby score. Knox County had 16 first downs on the night. North Shelby official stats listed nine Raider first downs.
"At halftime it looked like we were going to cash it in," said Knox County coach Steve Ramer. "We came out and played with pride in the second half. We fought against the position we put ourselves in during the first half. That is a huge step for us."
"Cameron Kirmse is a pretty good kicker," said Coach Ramer. "He worked hard on his kicking in practice this week. He put it through for a field goal in the first half. That last kick was a lot of pressure for a sophomore. He handled it fine."
"We condition our kids for four quarters. We just manned up and ran the football right at them on our last drive," said Ramer. "Ethan (Hustead) made a huge block at the end of the game. North Shelby has been pretty banged up in the last three weeks."
"They finally got their linemen back, that made a big difference for them," said Ramer. "North Shelby came out fired up. They played with pride. Their running backs played hard. Our kids deserved that win. They outworked (North Shelby) in the second half. They played hard."
Knox County travels to South Shelby with a shot at the playoffs. Standing in the way is all stater Ethan Harris who rushed for over 250 yards against Paris and had a defensive interception. Harris rushed for over 2000 yards last season.
Cardinal players to watch include quarterback Matt Patterson, fullback Matthew Schuman and linebacker Bryce Johnston. "We have a chance to knock off the defending state champs on their home field and be district champions," said Coach Ramer.
"We have showed small but steady improvement in big games," said Ramer. We are going to have to play mistake free football. They are a pretty good ball club."