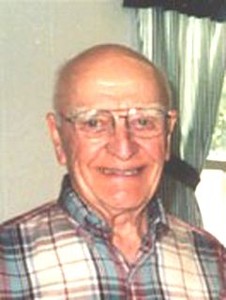 Funeral services will be held 10:30 am Thursday October 25, 2007 at Jones – Eden Funeral Home with the Rev. Telford Dindinger & Rev. Kelly Allard officiating. Visitation will begin at 12:00 pm Wednesday at the Jones – Eden Funeral Home in Washington where the family will receive friends from 6:00 until 8:00 Wednesday evening. Interment with Military Honors conducted by Washington American Legion Post 29 will take place at Elm Grove Cemetery in Washington. Memorials have been established to restoration of the Strawbridge – Shepherd House in Springfield, Illinois or to Bethel Presbyterian Church. Online condolences may be sent for Bob’s family through the Web at www.jonesfh.com.

Bob lived in Springfield, Illinois prior to moving to Washington County, Iowa in 1971. Bob was a Veteran of the United States Navy serving in World War II. He farmed all of his life. Bob also worked for the Department of Agriculture as an inspector. He was a member of Bethel Presbyterian Church, a past president of Farm Bureau where he served as president in Sangamon County, Illinois, and in Washington County, Iowa, served on the Washington County Hospital Board of Directors, and was a 4-H Leader for ten years while in Illinois. Bob was an Illinois State Chaplain for DeMoley International.