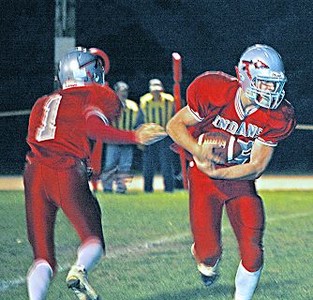 The Clark County Indians wrapped up an undefeated schedule Friday night, with an easy 43-6 victory over the Highland Cougars at home.
The Cougars won the opening toss, and elected to receive the football.  Caleb Tasco took the kickoff on the run at about the seven yard line, the dodged a number or Indian defenders before finally being stopped the 48-yard line.  The Cougar’s first play from scrimmage was mishandled, causing a fumble which Clark County’s Lynn Williams eventually recovered on the Highland 17 yard line. A holding penalty on Highland compounded the trouble, and the Indians got a first and goal on the Highland 8 yard line less than a minute into the game.
The Indians first attempt to score was a pass to Colt Sommers, who made the catch out of bounds behind the end zone.  A stubborn Highland defense denied Javis Vineyard and Ethan Allen from scoring, and Coach Matt Smith turned to place kicker Ryan Roberts, who split the uprights with a 25 yard field goal with 9:57 on the clock to give Clark County a 3-0 lead.
Highland’s next possession went three and out, and the Cougars were forced to punt the ball away, which was fielded by Vineyard and returned to the Cougar 40 yard line, but a series of incomplete passes forced the Indians to punt the ball, which rolled the Cougar one yard line before being downed.
Tasco showed his speed, and gave Highland a quick first down, followed by another first down by the quarterback Kyle Ellison.  Then the Indian defense stepped up, forcing the Cougars to punt again, and a lucky bounce of the ball gave Clark County the ball on the Cougar 38.
The Indians would capitalize on that good break quickly, as Allen connected with Matt Morrow in the end zone on a 38 yard TD pass with 3:29 left on the clock in the first quarter. The PAT kick was good, and Indians led 10-0.
Tasco again fielded the kickoff, and sprinted upfield before being stopped on the 18.  A pass reception by Matthew Norcross gave the Cougars another first down, but the Indians stopped the drive early in the second quarter.
Clark County started their next possession on the 44 yard line.  A 9 yard completion to Bryan Plenge, followed by a short Vineyard run gave the Indians a first down.  A bad snap over Allen’s head resulted in a turnover, which Craig Sutter recovered for the Cougars, and Highland started their next drive.
The Cougars would take advantage of the Indians mistake, and several completed passes later, Highland found themselves inside the Indian 10 yard line.  The drive was capped by a two yard touchdown run by Ellison.  Highland’s extra point attempt missed, and the Cougars closed the gap to 10-6 with 7:14 left in the first half.
Clark County bounced right back, as Allen connected with Morrow on a 53 yard touchdown pass.  Morrow broke two Cougar tackle attempts en route to the end zone with 5:58 left in the half.
Highland’s next possession faltered, and they were again force to punt.  The Indians drove inside the Cougar 10, where Erick Arnold fumbled the ball, but Cori Seth recovered.  Arnold pounded it in for the score with 2:34 on the clock, and Clark County led 23-6.
Clark County would add three second-half scores, all in the third quarter.  Ethan Horton scored on  a 5 yard TD pass with 9:50 on the clock in the third.  Colt Sommers pulled in a 38 yard TD pass with 4:55 left in the quarter, and Erick Arnold would catch a 34 yard pass for another Indian TD with 33 seconds left in the half.
Clark County turned in an impressive 14-26-0 in passing, good for 304 yard in the air.
The Indians will face District 8 champion Trenton in Kahoka at 7:00 PM on Wednesday.
The Bulldogs have had two playoff appearances, most recently in 1998, and lost both contests.  Clark County has had nine playoff appearances, and has a 4-5 record.