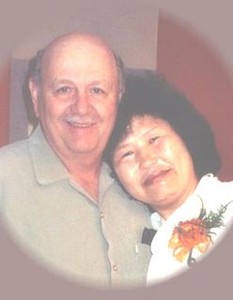 She fell in love with Dennis L. Owen, an American soldier, and were married in Korea.

She moved to the United States in December of 1971 and on March 25, 1972, they were united in Christian marriage at the Wayland United Methodist Church by Rev. Don Foley.

Survivors include her husband, Dennis, of Kahoka; a daughter, Jeanie Owen of Fishers, IN; a son, Jamie Owen, attending University of Central Missouri at Warrensburg, MO; her parents, Doo Sung Kang and Jong Soon Pak of Seoul, Korea; her American parents and their family, Hubert and Carol Lowes of Mattawan, MI; mother-in-law, Iona A. Owen of Kahoka; a sister and brother and their families, all of Korea; as well as other relatives.

She was preceded in death by her father-in-law, Wynn "Bud" Owen; two infants, Justin and Angela Owen; and two brothers.

Judy received her primary education in Korea and attended Southeast Iowa Community College at Keokuk in preparation of opening a day care and later floral design. Her first job in this country was at the Clark Co. Nursing Home where she met her American mother, Carol, who introduced her to the Lord. She later ran a day care in Kahoka and until the past year had owned and operated Cheerful Floral. She had many hobbies including crocheting, landscaping, and gardening. Her yard was a restful and beautiful retreat. She was a member of the First Baptist Church in Kahoka and Awana teacher. Her faith knew no boundaries, and she was an avid Bible scholar, prayer warrior and her true passion was sharing her love for Jesus. She walked and talked with Him daily. She loved the youth of the community and her home was always open to her children and their friends.

Funeral services were held Saturday, November 3, 2007, at 10:30 a.m. at the First Baptist Church in Kahoka with Dr. Rick Seaton and Pastor Brian Nicholson officiating. Eulogist was Mrs. Carol Lowes. Mrs. Iris Phillips was organist. Special music was "A lot of Things Different" recorded by Kenny Chesney, "His Eye is on the Sparrow" recorded by Jeanie Owen and Heidi Nicholson and congregational hymn "It is Well".

Visitation was held at Wilson Funeral Home in Kahoka after 9 a.m. on Friday with family receiving friends from 6-8 p.m. Memorials in lieu of flowers, were suggested to the First Baptist Church Awanas or Building Fund.

Condolences may be expressed on-line at www.timeformemory.com/wilsonfh.