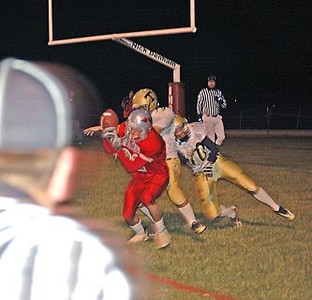 The Clark County Indians’ football season ended last Wednesday with a disappointing 28-20 loss to Trenton, but the Indians never gave up.
Both teams came into Wednesday’s sectional matchup state-ranked and undefeated, and fans were sure to see a good game.
Clark County won the opening coin toss, and elected to receive the ball.  Javis  Vineyard had to leap in the air to grab the bouncing kickoff, but then returned the ball to the 40.
The Indians moved into Bulldog territory, before being intercepted inside the 10 yard line.
The Indians stopped Trenton’s powerful running game on their first possession, forcing a punt and regaining possession near midfield.
But Trenton has a good defense too, and the Indians were force to punt the ball away, and Colt Sommers punt rolled dead inside the 8 yard line.
Trenton mounted a long scoring drive, primarily on the running back of DeAndre Vandevender.  However, it was  trick play, a 27-yard halfback pass from Vandevender to Kameron Alley in the end zone which gave the Bulldogs a 7-0 lead with just 23 seconds left in the first quarter.
The Indians’ next drive ended with another pass interception, and the Bulldogs had the ball on the Trenton 28.  The Indian defense held strong, and force a punt.
Clark County would start their next possession on the 45 yard line, and a fourth down pass completion from Ethan Allen to Matt Morrow gave the Indians a first down the the Bulldog 35.  Allen found Morrow again on 11, and the Indians moved deep in Bulldog territory.
Clark County tied the game with an Allen pass completion to Ethan Horton with 4:47  left in the second quarter, Ryan Roberts PAt kick was good, and the score was knotted at 7-7.
It didn’t stay that way long, as the Indians made one of their very few defensive mistakes.
After Trenton’s kickoff return was stopped at the 13 yard line,   Trenton quarterback Colton McGinness scored an 87-yard option keeper touchdown as Indians keyed on Vandevender.
Trenton added a 28-yard field goal with one second left in the half, and took a 17-7 lead into the locker room at halftime.
The two teams fought a defensive battler throughout the third quarter, with Trenton scoring another field goal midway through the quarter to take a 20-7 lead.
The Indians started their next scoring drive on their own 11 yard line with 2:12 left in the third quarter.  A big completion to Horton gave them a first down on the 37.  Completions to Erick Arnold and Bryan Plenge moved the ball upfield, before Allen connected with Morrow again on a 25 yard TD pass with 9;46 remaining, and it looked as if the Indians had seized the momentum. Roberts’ kick was good, and the Indians closed the gap to 20-14.
The Indian defense force another Trenton punt, and the Indians got the ball on the 24 yard line.  Allen connected with Plenge on a nine yard gain, then Allen, under pressure, threw the ball out of bounds on the next play and was flagged for grounding, which also drew a sideline warning against Clark County.  An interception ended the Indian drive, and Trenton would capitalize, with Vandevender scoring on a 15 yard run.  Vandevender also dove into the end zone on the two point conversion, giving Trenton a 28-14 lead with 3:42 remaining.
The Indians started their next drive on the 20.  After Allen was sacked, Horton came up with two catches to gain a first down.  The Indian kept moving as time was running down.  Sommers made a great fourth and 10 catch on the sidelines, working hard to keep his feet in bounds.
Allen connected with Morrow with only few seconds remaining.   Morrow was in the end zone,  juggled the ball and finally got possession on the one yard line.  A pass completion to Plenge with only 4 seconds on the clock left the Indians trailing 28-20, and the extra point kick was blocked.
An onside kick attempt was recovered by Trenton, and the Indians’ hopes of miracle comeback were dashed.
The Indians finished the season with a 10-1 record, and say goodbye to seniors Rob Schutte, Gus Roberts, Jacob Mack, Scott McAfee, Tyler Simpson, Erick Arnold, Ryan Roberts, Zack Saavedra, Jacob Smith, Ryan St. Clair, Chris Branson, Tony Edmondson, Colt Sommers and Alex Shirts.