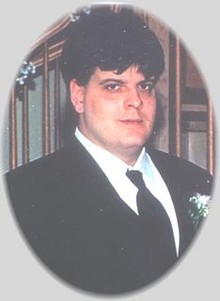 Survivors include his father, Melvin "Buck" Curfman, of Alexandria; his fiancé, Amanda Brown of Keokuk; a brother, Tate Curfman of Alexandria; a sister, Casie Riney and her husband, Matthew, of Newton, IA; a niece, Alexandra Riney, of Newton, IA; aunts and uncles: Connie and Donnie Gregory of Alexandria, Gerald and Sandy Curfman of Des Moines, David and Kelle Reid of Naples, IL, and Robert and Laura Reid of Bluffs, IL; as well as cousins and other relatives.

He was preceded in death by his mother in 2003; grandparents, Jack and Loraine Reid; and an aunt, Jacque Sorenson.

Tagart was a 1993 graduate of Clark Co. R-1 High School and had recently obtained his C.D.L. As a young boy he had loved cooking with his mother and became quite talented which led to his becoming a chef at Terrible’s in LaGrange. He then went to work as a cook at the larger casino, Ameristar, in St. Louis and then returned to the area where he was currently cooking at Chintz’s in Keokuk. He was also a former employee of Metzler.

Tagart loved to play pool and video games. He was a wrestling enthusiast and he and Tate shared that passion and watched and attended many matches together. His friends and family were very important to him.

Funeral services were held Saturday, November 10, 2007, at 10:30 a.m. at Wilson Funeral Home in Kahoka with Pastor David Reid officiating. Eulogies were given by friends and family with scripture reading by Connie Gregory and poem by Tate Curfman. Special music was recordings "Here Without You" and "One Sweet Day".

Burial was in Frazee Cemetery.

Visitation was after noon Friday at Wilson Funeral Home with family receiving friends from 6-8 p.m.