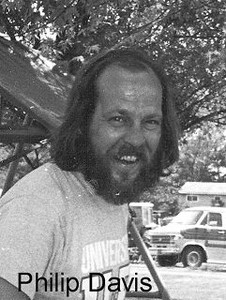 He was born on April 30, 1950 in Keokuk, IA, the son of Walter and Beatrice Schwarz Davis.

He graduated from Keokuk High School with the Class of 1968.  He attended Iowa State University in Ames, IA.

Philip had been employed at Griffin Wheel in Keokuk for twenty years.   He enjoyed going fishing and working on carpentry projects.

He is survived by two daughters, Audrey Oilar and her husband James of Trenton, IA and Alicia Pagan and her husband Richard of Canton, MO,  two grandchildren, one brother Roger Davis and his wife Kathleen of Keokuk, IA, a special cousin and caregiver, Roberta Bitting of Keokuk, IA, good friends, Todd & Shana Reed, a special friend, Dawn Kirchner and numerous cousins, nieces and nephews.

Graveside services will be held at 2 p.m. Saturday at the Frazee Cemetery in rural Alexandria, MO.  A Gathering of Remembrance for family and friends will be held on Sunday from 1 – 4 p.m. at Reeds Bar & Grill in Wayland, MO.