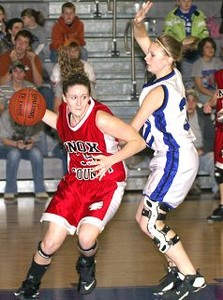 By David Sharp
Solid defense and a strong rebounding performance helped Knox County to a 40-27 road win over Paris (0-2) in the Lady Eagles first varsity action of the season. The November 30, 2007 contest saw Knox County take advantage of an off night from the field by the Lady Coyotes.
The Lady Eagles pulled down an unofficial 53 rebounds on the night. Five teams stand tied for the last spot on the state record books with 55 team rebounds in a single game. The all time MSHSAA girls’ basketball record for rebounds in a game is 92, set by Higbee High School vs. Bunceton in 1983.
Knox County dominated floor play early on, but could not get the ball into the basket often enough to break the game open. The Lady Coyotes battled back to within a point at the first break. Knox County held a 6-5 edge going into the second quarter.
The Lady Eagle offense could not connect, allowing Paris to take a 12-11 lead with 3:38 to play in the second quarter. Knox County had eight turnovers at that point in the proceedings.
Freshman guard Stacey Leckbee made two sharp passes for assists, jump starting the KCHS offense. Becca Mallett was on the receiving end of the second Leckbee assist for a 15-12 Lady Eagle lead with 2:10 remaining in the first half.
Lorrie Peters tossed in a free throw at the 1:33 mark of the second quarter, capping a surge of seven unanswered points to an 18-12 halftime lead. "It was nice to go on the road and play defense as well as the kids did," said Knox County coach John Weaver.
"We made some silly mistakes at times, but rebounding will get you through a lot of games," said Coach Weaver. "We put a body on somebody. We got on the floor and hustled. Defense and rebounding will win you a lot of games. When you hold a team to 27 points and you rebound the ball as well as we did, good things are going to happen."
Tessa Henderson tossed in a Paris three ball, trimming the Knox County lead to 20-16 with 6:29 showing on the third quarter clock. Katie Ausmus answered with a Knox County home run ball, extending the margin back to 25-20 with 5:21 showing on the third quarter clock.
Lorrie Peters connected with Becca Mallett on a well executed interior pass for a KCHS bucket with 3:11 to play in period three. The field goal capped an 8-2 Knox County run to a 28-18 lead.
Tessa Henderson beat solid Knox County defense with a great pass to Kayla Redmon, trimming the Knox County edge to 28-22 with a minute to go in the third quarter. The score remained the same at the close of the quarter.
Lorrie Peters and Becca Mallett earned put back buckets, extending the Knox County lead back to 32-22 with six minutes remaining in the game. Kayla Redmon answered for the Lady Coyotes with a basket 30 seconds later.
Stacey Leckbee scored off a solid Becca Mallett screen, for a 34-25 Lady Eagle lead at the 4:35 mark of the fourth quarter. Becca Mallett, Tessa Ramer and Stacey Leckbee connected on free throws late in the game.
Knox County led 35-25 with 3:58 showing on the fourth quarter clock. The Lady Eagles did not allow a Paris point during the final two minutes of the contest. Tessa Ramer flashed behind a Paris guard and stole the basketball with 1:33 to play in the game. Ramer sank two free throws rounding out the scoring in a 40-27 Knox County win.
Neither side did well at the free throw line. Paris (0-2) sank eight of 20 from the line and Knox County went 9-23 from the charity stripe. Paris missed a lot of perimeter shots, along with several under the basket. Knox County’s defense limited the Lady Coyote scoring chances.
"We struggled a little early on," said John Weaver. "We dusted off the rust. We moved the ball against their zone. We got the ball inside and were able to have some success."
Tessa Ramer scored a game high 14 KCHS points. Becca Mallett recorded a double-double with 13 points and 13 rebounds. Lorrie Peters scored five points and had 12 rebounds. Katie Ausmus and Stacey Leckbee scored three points each. Leckbee also stole the ball four times. Caley Palmer added two Knox County points.
Tessa Henderson led Paris with nine points. Knox County finished with 16 turnovers, about the same as the home team. Knox County had ten assists and scored 14 field goals on the night. The Lady Eagles recorded ten steals.
Knox County travels to Canton for what could be a stern road test on Tuesday, December 4. The Lady Eagles’ next varsity action is December 11 at Marion County. Knox County is slated for a December 13, conference game at Brookfield and a non-conference home game with Scotland County on December 14.