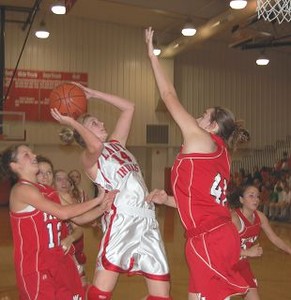 By Herb Butler
The Clark County Lady Indians evened their record at 2-2, as they opened at home as they took on a very good West Hancock Lady Titans team.
The opening quarter saw the Lady Titans jump out to a five point lead on the shooting of  6’2" sophomore Marley Hall’s ten points.  Daryl Goldie added 5 points for the Lady Indians, but the Lady Titans took the quarter 14-9.
The second quarter saw Kassidy Shuman take over the scoring, as she pumped in 10 points, while the Lady Indians held the Lady Titans to only 2 points, as they smothered Hall.  The Lady Indians took a halftime lead of 21-16 into the locker room.
The third quarter saw Shuman turn the scoring back over to Goldie, as Daryl put in another six points, Brittany Logsdon, Britni Bertelli and Brenna Buford added 2 each, as Clark County took the third quarter 12-8, to increase their lead to 33-24.
The fourth quarter started out slow for both teams, Goldie hit a three for the Lady Indians, Kassidy Shuman added 4, Amanda Winters had a basket, but the Lady titans hit 6 of 7 free throws, and added 3 baskets, and outscored Clark 12-9, but the Lady Indians moved to 2 and 2 on the season by defeating West Hancock 42-36.
The Lady Indians were led by Daryl Goldie and Kassidy Shuman, with 16 each, Amanda Winters added 4, while Brittany Logsdon, Britni Bertelli, and Brenna Buford had 2 each.
The ladies traveled to Quincy on Monday, December 3 to do battle with Quincy Notre Dame.