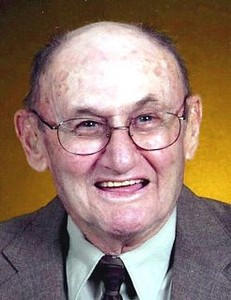 He was born July 2, 1932, at Kirksville, Missouri the son of James Francis and Agnes Rogerson O’Donnell.

On May 14, 1955, at Baring, Missouri he was united in marriage to Mary Margaret Marra.

Mr. O’Donnell was preceded in death by his parents, two brothers-in-law Benny Fisher and Jack Marra, and two sisters-in-law Patty and Janice Marra.

Mr. O’Donnell was raised in Adair County, Missouri where he received his education in rural schools and graduated from Kirksville High School.

Mr. O’Donnell served his country in the United States Army from December 3, 1952 to November 23, 1954.  In 1960 he and his family moved to Edina, Missouri where he was employed in agriculture area with Coop and Farmers Market.

Expressions of sympathy in memory of James Eugene O’Donnell may be made to the Knox County Nutrition Site, St. Joseph Restoration Committee or the Donors Choice. Memorials may be left at or mailed to Hudson-Rimer Funeral Home, P.O. Box 1, Edina, Missouri, 63537.