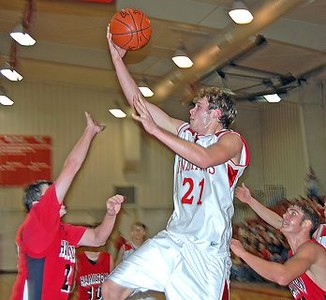 The Clark County Indians played at home against the Hamilton Cardinals on Friday, December 7. In the opening quarter the Indians struggled and could not get their game going, as Hamilton took the opening quarter 9-7. Colt Sommers had four points.
The second quarter saw the Indians start to look like the Indians should. Brian Plenge and Javis Vineyard had a three each, Colt Sommers added seven to lead the Indians to a 16-15 quarter, and they found themselves down at halftime by 24-23. Colt Sommers led the way with 11 points.
Starting the third quarter, Michael Brennan, who was held scoreless the first half, opened up with six third quarter points. Brian Plenge held to a trey, added five, and Sommers added another four points, and the Indians padded their lead to 44-35, as they put up a 21-point quarter, while Hamilton added 11.
The fourth quarter saw the Indians duplicate the third quarter, as they put up another 21-point quarter. Michael Brennan added seven points, Colt Sommers had four, Brain Plenge and Javis Vineyard a
had three pointer each, as the Indians rolled to a hard fought 65-51 victory.
Colt Sommers led the way for the Indians with 19 points, followed by Michael Brennan with 13 points, all in the second half, Brain Plenge added 12, Javis Vineyard chipped in with 11, Scott McAfee and Lynn Williams had four each and Ethan Allen battling foul trouble, added two.
The Indians are now 2-1 and await the Monroe City Panthers at home on Tuesday, December 11.